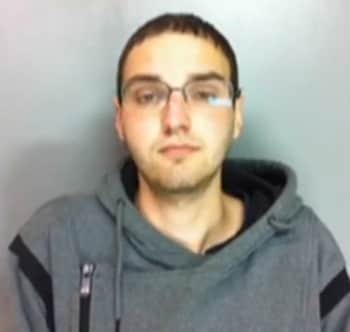 Authorities said they are unsure why Jules Kahle, who lives some 30 miles away, targeted that particular home. (Photo: WFMZ)

A Pennsylvania couple who entered their kitchen for a cup of coffee Saturday morning found themselves held at gunpoint by a man who unlawfully entered their home. After nearly half an hour, they were able to turn the tables on the intruder when one resident grabbed a gun of his own.

Authorities said 25-year-old Jules Kahle gained access to the Tinicum Township home by using a spare key hidden outside, but it’s unknown how long Kahle had been hiding inside before the couple awakened.

Michelle Spatz said after she walked into the kitchen, she turned around and Kahle was within just a few feet of her.

“We feel very lucky,” Spatz later told WFMZ. “But you’re still plagued with what could have happened.”

Kahle ordered her and her boyfriend into the living room and held them at gunpoint for about 20 minutes while demanding money and food. The couple pleaded with Kahle to just take the cash and food and leave.

Spatz said they tried to put themselves in Kahle’s shoes and attempted to talk him down, but according to a report by the Morning Call, Tinicum police Chief James J. Sabath said the couple was still convinced that they would either be greatly harmed or even killed.

Kahle eventually decided to leave after taking cash, credit cards and food, but once he was out of the door, Spatz’s boyfriend saw an opportunity to ensure this didn’t happen again. He grabbed a gun from inside the house and confronted Kahle on the driveway while Spatz grabbed a phone and called 911.

Police arrived within two minutes and found Kahle sitting inside a car parked in the driveway, with a gun beside him, and Spatz’s boyfriend holding Kahle at gunpoint.

Officers ordered the boyfriend to drop his weapon, at which time they moved in and made an arrest. No shots were ever fired and no one was physically injured during the entire incident.