A civics and government teacher who took down a student armed with a gun after shots were fired inside a Lacey, Washington, high school early Monday morning is being called a hero, but the man said he didn’t act alone in subduing the gunman and only did what anybody else would have done.

The 16-year-old student entered the gymnasium at Thurston High School around 7:30 a.m. and fired a single shot from a revolver into the floor. The sophomore then made his way into the cafeteria, where he fired a second shot into the ceiling, local media reported.

“We thought it was fake for a second,” said 16-year-old Anthony Rybalkin, who witnessed part of the incident and recognized the suspect from his sixth period class. “Then he shot off another round. Everyone just started running out the back door.”

Rybalkin attempted to run out of the building with the rest of the students, but tripped and fell. He said he turned around to see if the suspect was behind him, and that’s when he saw the teacher tackle the gunman to the ground.

That teacher was Brady Olson, who after tackling the teen wrestled the gun away from him with the help of three other staff members – Tim Brown, Dean of Students; Principal Steve Rood; and Security Officer Jim Beltico. Apparently as Beltico approached, he already had his service pistol drawn. 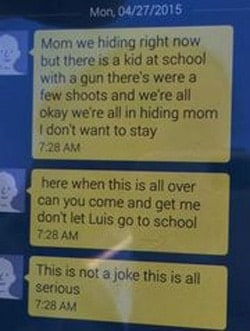 Some parents received text messages from their kids Monday morning that no parent ever wants to see. (Photo: King 5)

By the time responding officers arrived, the situation had already been diffused by the staff members and the teen was taken into custody less than half an hour after the first shot was fired. Lacey Police Commander Jim Mack said there’s reason to believe the teen was attempting “suicide by cop” and that he told authorities he had no intentions of hurting anyone. No one was injured during the incident.

Students who knew the teen suspect, whose identity has not been released, were shocked by the morning’s events. Many described the teen, who had just transferred to the school a few weeks ago, as a likeable, friendly person who never bullied anyone. But Rybalkin said he was wearing all black and had a cigarette in his mouth, and looked different that day than he had before.

Students and staff were not, however, surprised to hear that Olson was the one who intervened. Some said he is a popular teacher who always looks out for his students and now he’s being called a hero by many.

But Olson said he was simply doing what anyone else would have and all of those who responded acted quickly and with the utmost professionalism.

“No one, including myself, can prepare for a situation like this, so I’m very thankful that we’re all okay,” Olson said in a statement on the school’s website. “As always, students come first, and today was no different. I reacted in a way that any other teacher would react at the sound of a gunshot … going toward the sound of gun fire rather than away.”

Olson concluded by saying he’s “proud to be a member of the bigger community of educators who teach and take care of our kids every day.”

He said any other staff member at any other school across the country would have reacted the same way.