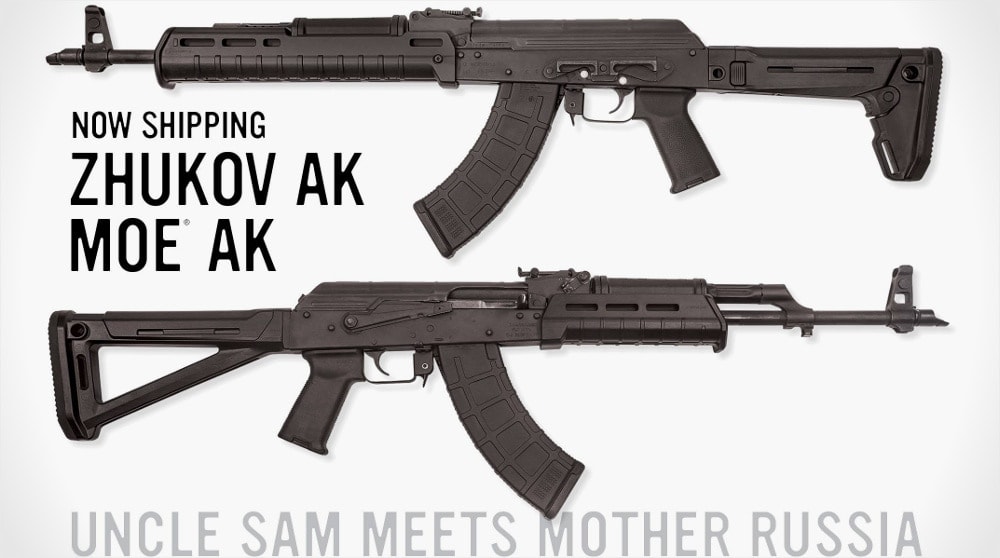 Magpul is now shipping both sets of AK furniture, the featured Zhokov and rugged MOE stocks and forends. (Photo: Magpul)

Magpul is making good on its promise to deliver AK by Q4 2015 by a hair, having just announced the new stocks and forends are shipping to stores now. Introduced at the top of the year, the new MOE and Zhukov furniture represent a solid dedication to the AK platform as a whole.

Magpul is rolling out two MOE handguards, the MOE AK that’s compatible with AK rifles without sling loops on the handguard retainer plate and the MOE AKM for use with rifles with forward sling loops. Both have stainless steel heat shields with a matte black finish. The Zhukov handguard extends beyond the gas block for a long, forward rifle grip, the type used with some ARs.

MOE AK and AKM handguards can be used with Ultimak railed gas tubes and both are priced at just $36. The MOE stock is priced in line with comparable AR MOE stocks at $59. It’s a fixed stock that mounts to the standard AK tang and uses a wedge block to fit to all receiver types without modification or the use of adapters.

The Zhukov set takes things a step forward with a side-folding, adjustable-length buttstock and extra-extended handguard. Like the MOE handguards, the Zhukov is compatible with Ultimak gas tubes. It doesn’t use the standard handguard retainer plates, instead, it uses an included extruded aluminum chassis.

At $99 each, the Zhukov parts are the most expensive of the new AK accessories, but still less expensive than some of Magpul’s high-end AR furniture. The new AK buttstocks accept standard MOE cheek risers for use with raised optics. The Zhukov folds to the right side and clears the bolt handle and ejection port in order to be able to fire when folded.

Other details and specifications can be found on the Magpul website. If you’ve got an AK and have been dying to give it the full Magpul treatment, keep an eye out because the waiting’s almost over.