Editor’s Note: This article originally referred to the OPFOR mag carrier as a prototype product which is not correct.  An accessory to this product, not used in this review, is a prototype.

US military veteran-owned Limitless Gear set out to radically improve the way riflemen carry and manipulate AR magazines… and they’re well on their way to helping shooters enjoy new, more efficient possibilities in this tactical arena.

We took a couple OPFOR mag carriers for a test drive.  Where?  Well, pretty much anywhere you would want to put these hard-sided pouches—they’re made to strap onto MOLLE or PALS webbing in the position of your choice, including mags-downward (see photo below). Magazines click into place and are released by grasping the mag with a slight twist and pull.  The system is right- or left-handed friendly, and fits most standard AR magazines. Testers in this session used PMAGs.

Magazines were entirely secure in the hard pouches and didn’t so much as rattle when turned upside-down and shaken. Withdrawing the mags from the downward carry position was intuitive and efficient. Securing the pouches to gear, particularly staying secure in the traditional mags-up position, is an aspect Limitless Gear is working on. 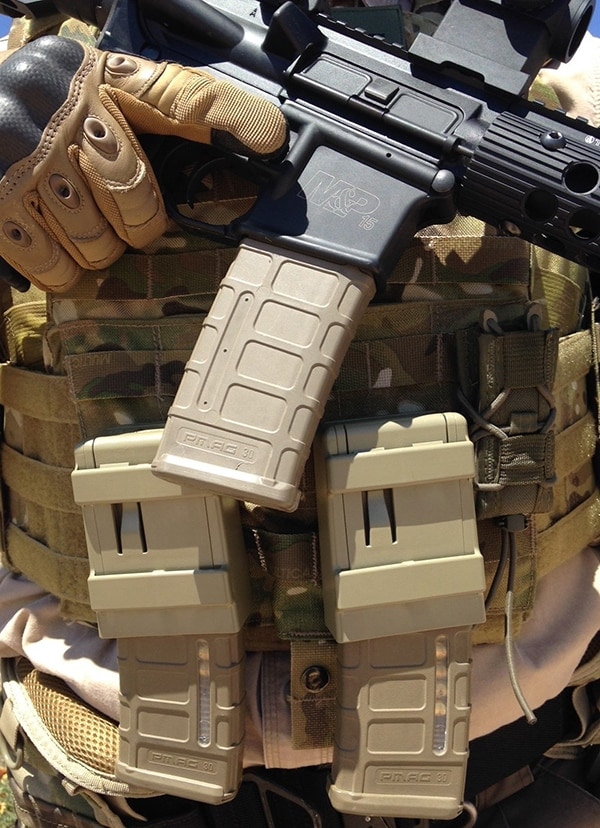 Reloads are intuitive and fast from this position. (Photo: Eve Flanigan)

Consultation with Limitless Gear assured our testers that this design may work best by fabricating a backing, and that they are presently re-designing the jaws that hook into the MOLLE/PALS system.  They provided a diagram showing how to cut and place MALICE® clips so as to secure the rigid pouches to webbing. Unfortunately both subjects were traveling on a training exercise during this test, and did not have access to spare clips they were willing to cut.

Among the testers were a police SWAT team member, who first inserted the pouches open-side-up, front of chest, on top of body armor.  Carry in that configuration led to the carriers popping off upon mag withdrawal about as often as they stayed in place.  Placing them downward helped, and after a few test draws, the officer was releasing magazines surprisingly fast with a small twist of the wrist to release the secure, no-straps hold the pouches have on the mags. Still, he didn’t feel that the pouches themselves were secure without the reinforcement of MALICE® clips as a backbone.

The second tester, a recent veteran of US Army Special Forces, liked the idea of strapping the OPFORs onto a rifle or other off-body pack for easy access to magazines.  Like the first tester, he was impressed by the speed with which mags could be released and put into action for speed or tactical reloads.  However, he stated he wouldn’t want rigid plastic on his frontal torso atop hard body armor.  Climbing over obstacles or being slammed into a hard surface, he opined, goes better with a soft carrier. 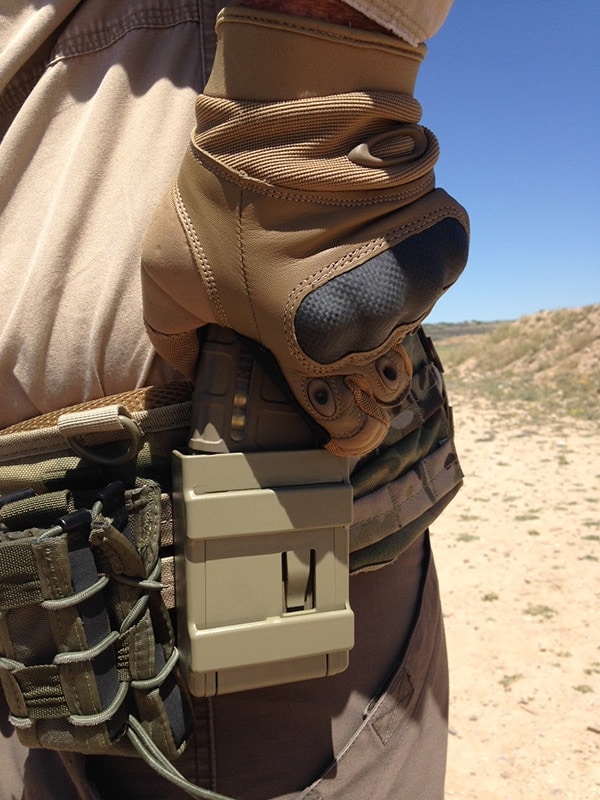 A “beer can grip” and OPFOR makes for fast reloads. (Photo: Eve Flanigan)

Both testers were quick to adopt a belt-mounted configuration after trying front-of-body carry. Both stated belt carry with the OPFOR is a quick, convenient mode of carry that, with some practice, would offer faster reloads than a cloth pouch. Neither of these shooters is a regular three-gun competitor, but both observed that the OPFOR mag carrier will appeal to three-gunners using belt carry.  Belt carry may or may not suit LE/MIL applications, depending on the number and placement of other bulky items—cuffs, pistol mags, flashlights and the like—across the torso and belt.

The OPFOR mag carrier is a promising sign of things to come from Limitless Gear.  By re-engineering traditional mag carry, they’ve done away with a lot of wasted motion, and thus time, on reloads.  With some practice to develop “muscle memory” (in quotes for the medical purists) for the combination of beer-can-grip-on-mag to reload from a belt, the system would offer faster reloads than any current law enforcement/military setup offers.   When the system of attaching the pouches to webbing is improved on the final product, these carriers will be the first choice for many.

All photos by Eve Flanigan