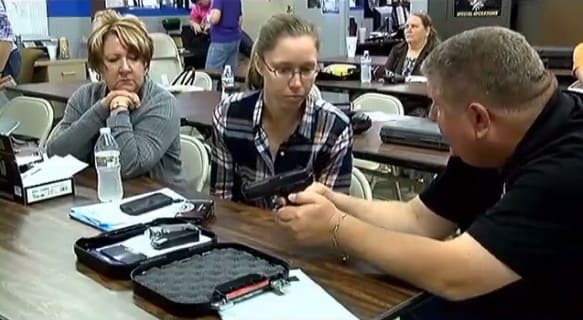 Many women said they became gun owners at the persuasion of their significant others, but not all of them were taught how to use the gun once they had it. (Photo: KPLC)

Females of all ages across southwest Louisiana are learning how to protect themselves with a variety of tools ranging from martial arts to other non-lethal means to the most common form of protection: Firearms.

Girlie Girls is one of the state’s mentoring programs, and recently offered a martial arts class for nearly 50 young girls. Program founder Anita Barker told KPLC in a recent interview that many of the girls in the program often stay home alone, and part of the focus is teaching the teens to be aware of their surroundings and what can be done if they ever do find themselves in a potentially dangerous situation.

Shun Hartley, a fifth level martial arts instructor who headed the class, said protecting oneself is not so much about masculinity or strength as it is just confidence.

“You can teach someone over and over how to be effective and how to utilize certain techniques, but if you don’t have the confidence to apply the techniques, then it was just a waste,” Hartley said.

And most of the moms agree, reiterating that they would rather their girls learn to fight back now – before it’s needed – rather than lack the knowledge or confidence needed to avoid becoming a victim.

Other women are turning to guns for protection, but much like martial arts, knowledge and confidence are still key; And Damsels in Defense is one company which aims to provide both for interested women. According to the website, the company’s goal is to “Equip, Empower and Educate.”

Mark Herford, chief detective and lead firearms instructor for the Beauregard Parish Sheriff’s Office, said the majority of the homes in their area are rural and contain firearms, but Herford also pointed out that it takes more than just having a gun to be safe.

“It’s the responsibility of any person who lives in a home, who has firearms, to educate themselves, become familiar,” Herford said. “Also, to spend a significant amount of time thinking about how they’re going to make their home safer with the weapon in it instead of less safe because it has a weapon in it.”

Yet most of the women in a recent Damsel in Defense class admitted that they weren’t completely confident on how to handle a firearm. However, Herford said there’s an increasing number of classes available in the area that focus specifically on teaching females about firearms, including one to be hosted by the Calcasieu Parish Sheriff’s Office on Saturday.