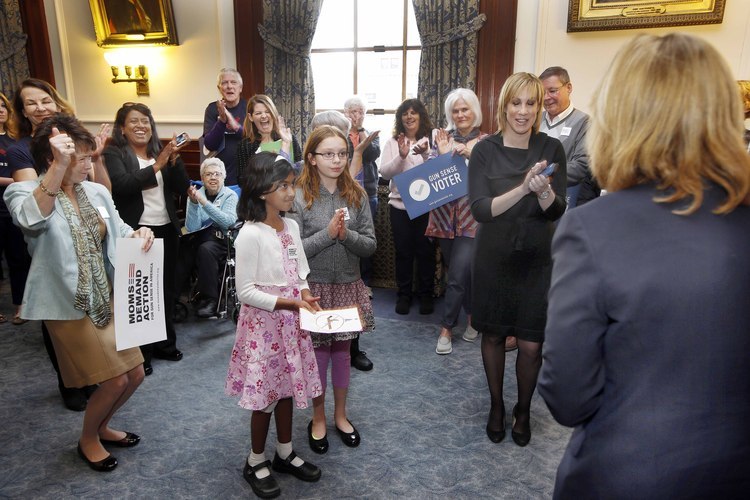 The bill, which would bring back a practice that was regulated through a licensing scheme in the 1920s, previously passed the Senate by a 14-9 party line vote in February. Now, with Hassan’s threat, the stage may be set to pursue a veto override in the Granite State.

“Law enforcement, as well as citizens across New Hampshire, have strong public safety concerns about allowing people to carry concealed guns without a license and oppose removing the protections that the licensing process offers to help ensure that potentially dangerous individuals are not allowed to carry hidden weapons,” Hassan wrote in a statement released Wednesday before the House vote.

“By passing Senate Bill 116, the legislature would be taking a step away from our tradition of common-sense gun laws, and I intend to veto this measure if it passes,” she warned.

The proposal, introduced by Republican Senate Majority Leader Jeb Bradley and now headed to Hassan, keeps the state’s current concealed carry permit system that has been in place since 1923. However, it makes clear that the fact those permits exist does not prohibit unlicensed transport or carry of a concealed pistol or revolver in a car or on one’s person if the carrier is legally able to possess a firearm. Keeping the option of issuing permits would allow state residents to carry while traveling to other parts of the country that honor New Hampshire’s current licenses.

“This modest bill merely allows somebody who has the right already to openly carry a weapon to do so on a concealed basis without securing a license,”Bradley said. “I hope the governor will embrace this right of New Hampshire citizens to protect their lives, liberties, and loved ones.”

Of the state’s neighbors, Vermont has always had constitutional carry while lawmakers in Maine are pushing to enact the practice in that state this session.

Moms Demand Action, members of whom Hassan met with before Wednesday’s vote, condemned passage of the legislation.

“The legislature sided with the interests of the gun lobby today – but thankfully, Governor Hassan is standing with New Hampshire moms and families – and the 73 percent of Granite Staters who support the existing concealed carry permit system,” said Amy Moore with Moms Demand Action in a statement, mentioning results of a survey paid for by former New York Mayor Michael Bloomberg’s Everytown for Gun Safety group.

Hassan’s threatened veto, if delivered, would be the third time so far this year that Republican-dominated state legislatures passed a constitutional carry measure only to see it torpedoed by a sitting Democratic governor. Last month, lawmakers in Montana and West Virginia gave their final seal of approval to measures to bring the practice to those states, only to meet with veto ink from chief executives who cited safety concerns as a reason to derail the reforms.

According to New Hampshire laws, Hassan’s veto would return the bill to the state Senate where it would have to pass by a two-thirds majority to which the House would have to concur. In that senior chamber, Republicans hold 14 of 24 seats and would need to count all of their members as well as pick up two Democrats to carry an override.

In the 400-seat House, the GOP would need to keep its 239 votes and convince two dozen lawmakers on the other side of the aisle that New Hampshire is better served by going constitutional carry despite the wishes of the governor. Wednesday’s vote saw a number of Democrats cast their lot against Hassan already, notably Reps. Wendy Piper, of Enfield, and Larry Converse, of Claremont.

Either way, 2016 is an election year for all New Hampshire state lawmakers, Hassan included.