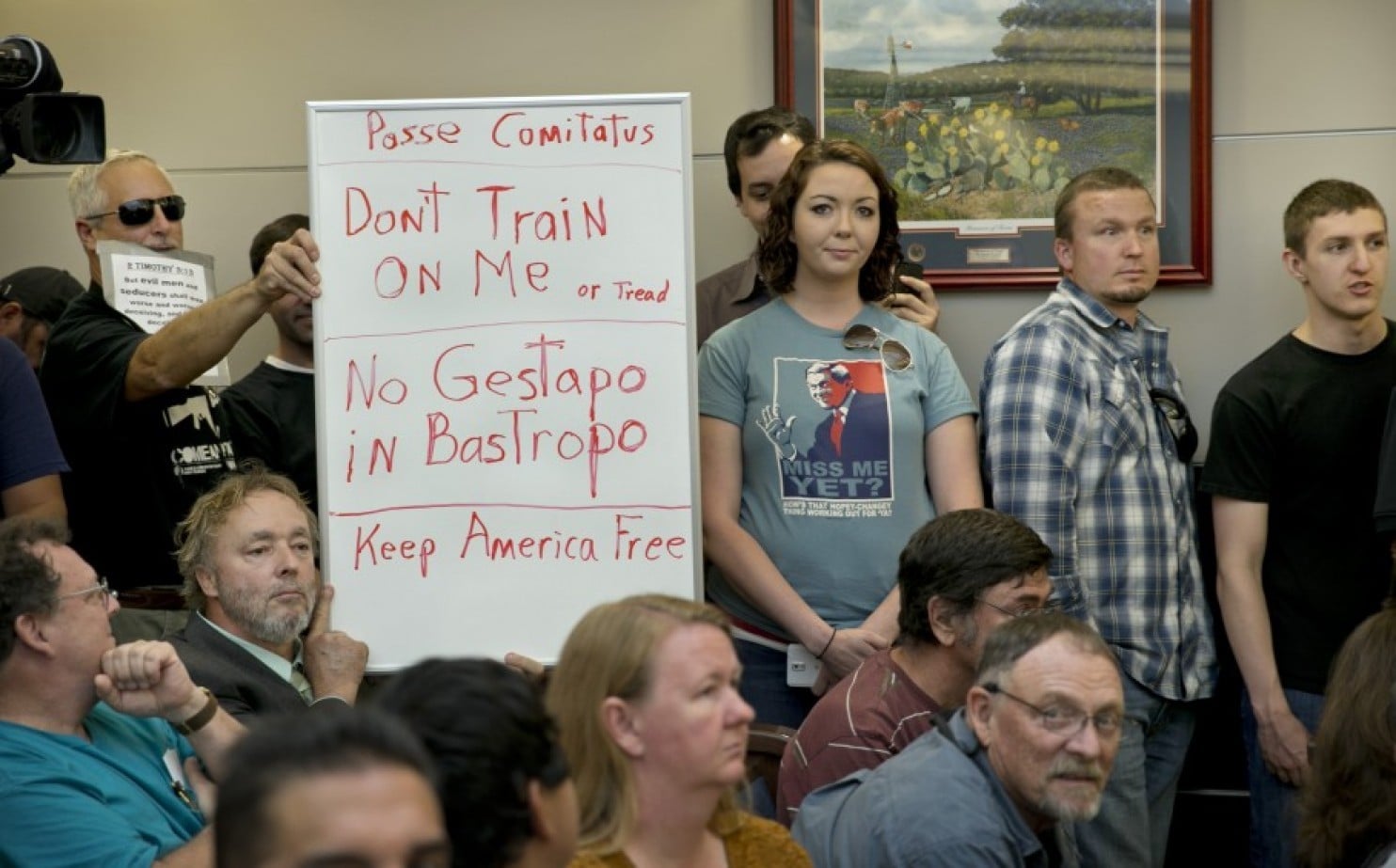 Local residents in Bastrop County Texas this week protested an upcoming military exercise in the state, leading Gov. Abbott to call out the State Guard to monitor the event. (Photo: Austin American-Statesman)

Gov. Greg Abbott (R) this week gave the little-known Texas State Guard the task of monitoring the upcoming military training in the state to protect residents and property.

The joint annual exercise, dubbed Operation Jade Helm 15 by the U.S. Special Operations Command (USSOCOM), is set to train some 1,200 military special warfare and support units from July 15 through Sept. 15 across seven states– to include Texas.

“The training exercise will be conducted on private and public land with the permission of the private landowners, and from state and local authorities,” reads a statement on the U.S. Army Special Operations Command (USASOC)’s website. “In essence, all exercise activity will be taking place on pre-coordinated public and private lands.”

Among the planned exercises, some 60 special operations members will deploy to private property in Texas’s Bastrop County, which brought crowds of protesters to a special County Commissioner’s meeting about the event Monday.

“All I want to makes sure is that our guys are trained for combat overseas. That is it,” Lt. Col. Mark Lastoria, spokesperson for the Army, told those assembled. “For this and for the training tasks at hand, you need large rural area with access to towns as well, because we have to practice some of the logistics that go along with it.”

To assuage fears of possible damage to life, rights, and property, Gov. Abbott, sewing his oats in his initial few months in office, penned a letter to the Texas State Guard (TXSG) ordering the force to monitor the exercise.

“During the training operation, it is important that Texans know their safety, constitutional rights, private property rights, and civil liberties will not be infringes, ” Abbott outlined to Maj. Gen Gerald Betty, commander of the State Guard, who report to the governor directly. “By monitoring the Operation on a continual basis, the State Guard will facilitate communications between my office and the commanders of the Operation to ensure that adequate measures are in place to protect Texans.”

The Texas State Guard, the third branch of the military in the state of Texas alongside the Texas Army National Guard and Air National Guard, is an organized state militia that is not bound by the Dick Act of 1903 to answer to the President as the other two branches must. Such state defense forces operate under the authority of their respective governors and cannot be federalized.

Although not traditionally armed, the State Guard has a program to assist members with obtaining state concealed handgun licenses.

According to the State Guard Association of the United States, although most states have the legal framework in their constitutions to allow for a state guard, just 19 to include Texas, maintain an active one.

Bastrop County Judge Paul Pape advised the Associated Press that the county could see a $150,000 influx of cash to the economy associated with the exercise, but cautions that “conspiracy theorists” had driven the train in decrying Jade Helm as something more than a training evolution.

“There’s been a lot of dust thrown in the air, a lot of haze,” Pape said. “Those who wanted to raise concerns on the one hand succeeded. They’ve raised a lot of attention about this. But the fact is the message is clear: Jade Helm is a well-designed and a well-constructed training operation.”