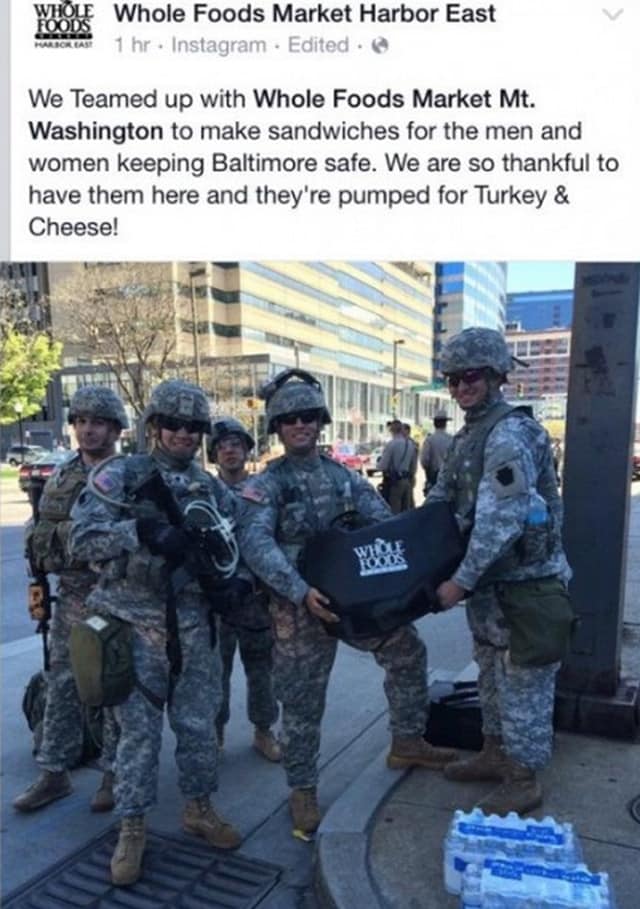 As riots erupted in Baltimore, a couple of local Whole Foods stores tried to do something which they saw as positive, but others saw as an outrage.

“We teamed up with Whole Foods Market Mt. Washington to make sandwiches for the men and women keeping Baltimore safe. We are so thankful to have them here and they’re pumped for Turkey & Cheese,” a tweet from one of the local markets said, atop a picture of several National Guardsmen toting away a Whole Foods bag and bottled water.

While the move saw support, it also created instant criticism, and folks took to Twitter to express their opinions on the matter before Whole Foods eventually just took down the post.

“We removed the post because it did not accurately reflect all our local stores are doing to feed people across this city, especially children,” Whole Foods spokesperson Katie Malloy explained. “Again, we love our community, and will continue to support our city in the days to come, as we always do, and extend our heartfelt sympathy to those affected.”

As Baltimore's poorest kids are left hungry due to school closure (no school lunch), @WholeFoods feeds the oppressor https://t.co/5maDJK5crX

@AngryBlackLady So tone-deaf to extend kindness to folks preventing black neighborhoods from being razed. @WholeFoods

@JamilahLemieux @WholeFoods @WholeFoodsPR @wholefoodsnyc I do believe you are mad at the wrong people. Get a grip and get mad at the rioters

@mooneyedmelly We’re also working with the Baltimore Department of Recreation and Parks for ongoing lunch and snack donations.

@mooneyedmelly Did you apologize to Whole Foods? Turns out they are feeding Baltimore's citizens.

@mooneyedmelly @WholeFoods Um hello the National Guard is there to help save a town trying to destroy itself!

.@WholeFoods Don't listen to the haters. No good deed goes unpunished. I, for one, think your gesture was generous and deserving. Thanks!