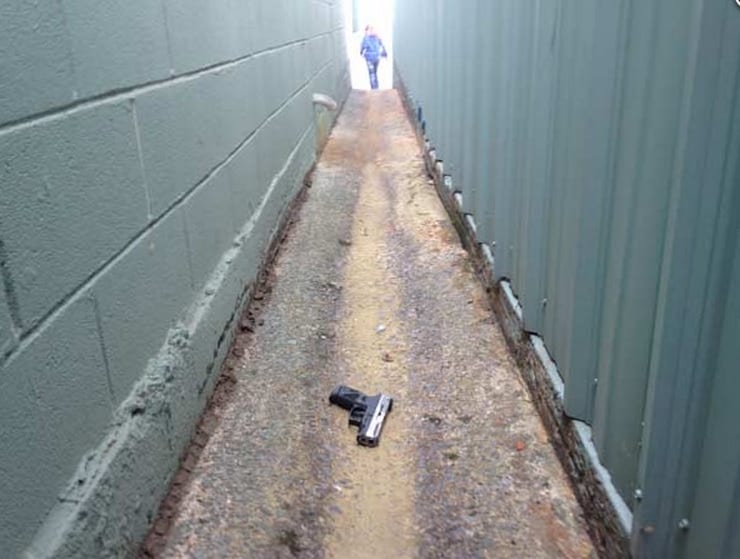 Officers said while the teen was fleeing, he dropped the firearm in between two buildings. (Photo: NBC 29)

A 16-year-old boy is facing five different charges after he pulled a loaded gun on officers responding to a call about a group of teens fighting in Waynesboro, Virginia, Wednesday afternoon.

Police received the call around 4 p.m., which indicated that there were a mob of about 15 to 20 teens fighting in the street. When responding officers arrived, most of those involved had apparently already fled the scene, but they noticed one teen walking quickly down the street, holding his waistband. The officers knew the teen was likely trying to hide a weapon.

“You can see when a person looks like they’re trying to conceal a weapon in their waistband,” Waynesboro Police Sgt. Brian Edwards told the News Leader.

The teen fled on foot and three officers chased after him. But during the pursuit, when officers were about 20 yards from the teen, he reached into his waistband, pulled a .40-caliber Taurus semi-automatic handgun, and pointed it at the officers. According to the officers’ account, he brandished the firearm twice.

After aiming at the officers, the teen fled for a second time, and ran in between two buildings where he dropped the gun, which officers later recovered. The gun was loaded with four rounds, including one in the chamber, according to a release.

Authorities eventually caught up with the suspect again and he was taken into custody. The teen, whose name has not been released, was charged with one felony assault on an officer and four misdemeanors, including brandishing a firearm, obstruction of justice, carrying a concealed weapon and possession of a firearm by a juvenile.

One officer, who did not wish to be identified, said he had his service pistol unholstered and aimed at the teen, but even though the teen was armed, he never felt the need to pull the trigger.

“It’s a split-second decision and falls back on the officer’s training and a gut reaction,” Edwards noted. “That gut reaction and that momentary hope of it wasn’t going to end badly for the officers or the 16-year-old.”

In the end, no shots were fired and no one was injured.

The incident is still under investigation and authorities are working to determine where the gun came from.