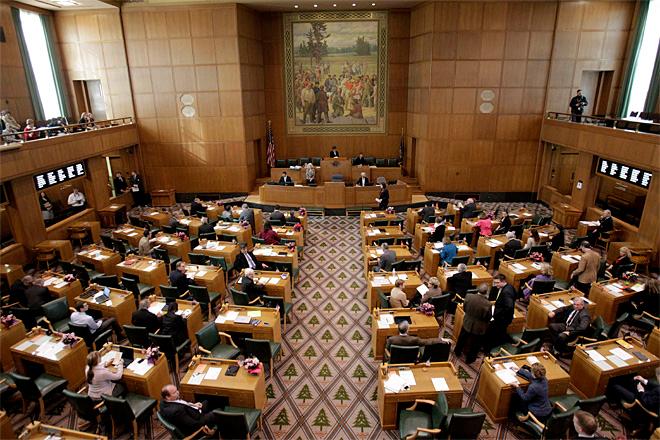 Oregon’s state House is set to give what could be the final vote on a measure to bring expanded background checks. (Photo: KOUI)

With gun control and gun rights groups each calling for opposite outcomes, a measure to mandate expanding background checks for virtually all firearms transfers is set for its final review by Oregon lawmakers.

The measure, introduced in March as the “Oregon Firearms Safety Act,” passed the Oregon Senate by a 17-13 vote with one chamber Democrat jumping ship and casting her vote with the opposition Republicans. This in turn led to an epic 9-hour public hearing in front of a House committee that nonetheless ended with a 5-4 vote to advance the bill to a floor vote in a strict, party-line roll vote.

Now that bill, SB 941, which would require that all private gun sales take place through licensed firearms dealers who would perform background checks, is headed to a final vote Monday in a chamber where Democrats hold a significant majority.

Advocacy groups on either side of the issue are stumping hard for their members to apply pressure on House lawmakers in an effort to sway votes to their side.

Local organizations Blue Action Oregon and the Oregon Alliance for Gun Safety are joined by active social media campaigns by national groups to include the Brady Campaign and Everytown for Gun Safety in support of the measure they feel will save lives.

“The Oregon House of Representatives will vote Monday on a bill to close the background check loophole – the final vote needed to pass this life-saving legislation. And it’s going to be close,” said Everytown’s appeal.

The group, alongside Moms Demand Action, contends that as many as 81 percent of Oregonians support more background checks in recent polling.

Gun rights organizations such as the National Rifle Association and National Association for Gun Rights along with conservative groups and bloggers are pushing back just as hard in an effort to derail the legislation.

“It is critical that Oregonians contact their state Representative with strong opposition to this bill,” reads an alert from the NRA. “If enacted, SB 941 would require individuals to appear before a gun dealer to request a criminal background check prior to privately transferring a firearm, absent limited exceptions. Transfers include, but are not limited to, sales, gifts, loans and leases. Failure to comply with this mandate could result in stiff penalties and possible loss of an individual’s Right to Keep and Bear Arms.”

As could be expected, GOP lawmakers are coming out strong against the measure, but are getting support from members across the aisle – even if some of it is unintentional.

Rep. Vic Gilliam, R-Silverton, one of the House committee members who voted against sending the measure to the floor, termed the legislation empty and misdirected in an editorial published by the Statesman Journal. Nevertheless, it’s not just Republicans who have done so in recent weeks.

State Sen. Betsy Johnson, D-Scappoose, penned a scathing review of SB 941, saying, “The overriding intent of Prozanski’s bill is not directed at violent behavior, but at making gun ownership more inconvenient for the law-abiding.”

Those speaking out in favor of the bill in the House have in some cases done more harm than good. This is exemplified by Sen. Chuck Riley, D-Hillsboro, who is already facing a recall push in his home district over his stand on guns, making the public gaffe of describing the 19th century Supreme Court’s stand on slavery as “right for the time” when compared to gun rights. This earned Riley condemnation from Senate Republicans who are now calling for his censure.

If Monday’s floor vote were successful, SB 941 would progress to the desk of Democratic Gov. Kate Brown who has voiced support for expanding background checks.

House Majority Leader Val Hoyle, D-Eugene, explained last month that should the expanded background check bill somehow not make it to law this session, she expects gun-control advocates to put a similar proposal on the ballot in 2016, as they did in Washington state recently.

Such a measure would “likely be more restrictive” than SB 941, said Hoyle. “And in a presidential election year, it would pass.”