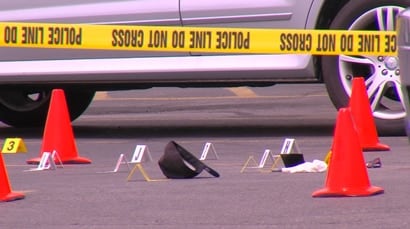 Police say while the man originally acted to protect the woman, he acted in his own defense when the suspect tried to take the gun. (Photo: KSL)

A man wanted for several felonies was fatally shot by an armed citizen while trying to steal a woman’s car in the parking lot of a Orem, Utah, grocery store Saturday morning.

According to a local Fox affiliate, the entire incident started earlier in the day when police received a call about a fight. When responding officers arrived to the location where the scuffle was, three men and two women fled from the scene in a vehicle. After hitting a curb, all five suspects exited the vehicle and fled on foot.

A short time later, Luis Zarate, who was doing residential landscaping, noticed one of the suspects coming by on a bicycle, KSL reported. But as the suspect came towards Zarate’s pickup truck, he ditched the bike and stole the truck. Zarate said he left the keys in the truck while he and his crew were working in the yard.

The suspect then drove the stolen pickup to a nearby Maceys grocery store, where he encountered a woman with a Mercedes SUV in the parking lot. The suspect tried to pull the woman from her car, but she began screaming. A man parked a few spaces down heard the woman cry for help, and decided to intervene. He stopped at the store to grab some food before heading to the firing range.

Gun in hand, the man approached the suspect, who then turned his attention towards the man and his gun. The suspect attempted to take the man’s gun from him, and that’s when the armed citizen fired a single shot, striking the suspect in the chest.

The suspect, who was only described as a 26-year-old man, was transported to the hospital where he later died.

Authorities confirmed the 31-year-old armed citizen, who’s name has not been released, had a valid concealed carry permit, and also indicated no charges would be filed against him, as he acted appropriately and within the law.

Authorities also confirmed they had been searching all morning for the suspect, who was wanted on several felony warrants.