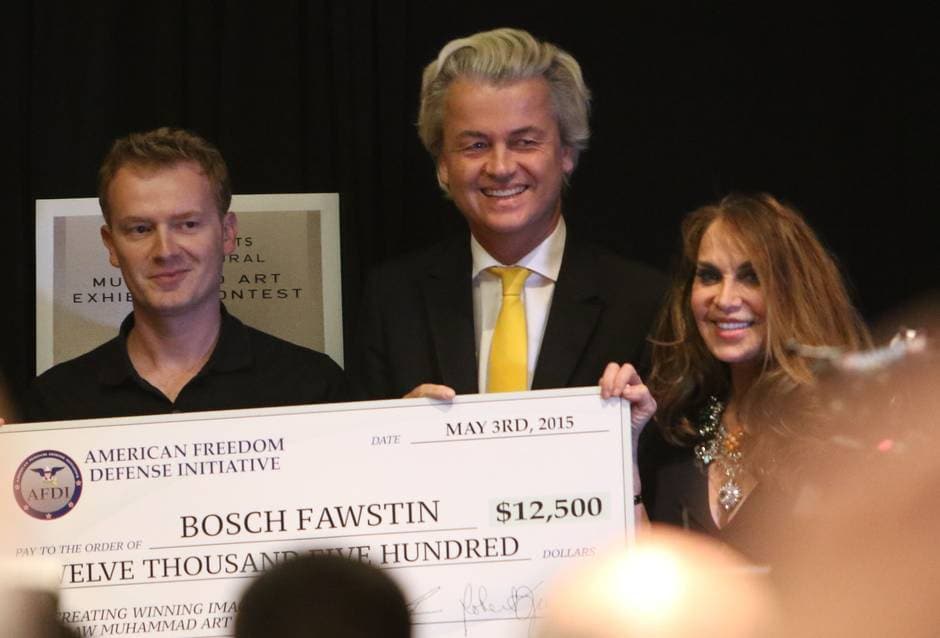 Despite the commotion outside, contest winner, Bosch Fawstin (left), still walked away with a nice-sized check. (Photo: The Dallas Morning News)

Two men are dead after they began shooting at a “free speech” event Sunday evening just outside of Dallas, where about 200 people were participating in a cartoon contest depicting Muhammad.

Gunfire erupted just after 7 p.m. outside the Curtis Culwell Center in Garland. According to a local ABC affiliate, the gunmen shot an unarmed security guard in the leg before law enforcement officers who were at the event fatally shot the suspects. Witnesses say about 20 shots were fired.

The security guard, Bruce Joiner, 58, was transported to the hospital where he was treated and released for non-life threatening wounds.

Jim Harman, who was attending the event when the shooting occurred, said “there was no panic” from the people inside, The Dallas Morning News reported.

“We knew something had happened,” Harman said, “but we didn’t hear anything and didn’t see anything.”

Initially, there were concerns that the vehicle driven by the suspects, which was parked right outside of the center, may have contained explosives. As a result, the center, as well as a nearby Academy Sports, Walmart and Sam’s Club were all evacuated as the bomb squad made its way to the area.

Authorities worked the scene well into the night and witnesses reported hearing loud booming noises around midnight. However, authorities did not indicate whether any explosive devices were found.

The event, which was being held by the American Freedom Defense Initiative, was an art contest offering $12,500 to the participant which created the best cartoon of Muhammad. According to Pamela Geller, the group’s president, the event was planned as a stand for free speech following recent attacks outside of the United States.

Geller told The Washington Post the shooting was “obviously related to our event,” citing social media posts from ISIS supporters.

“This incident shows how much needed our event really was,” Geller added. “The freedom of speech is under violent assault here in our nation. The question now before is — will we stand and defend it, or bow to violence, thuggery, and savagery?”

As of early Monday morning, the names of the suspects have not been released, and authorities have not commented on whether they believe the shooting was an act of terrorism.