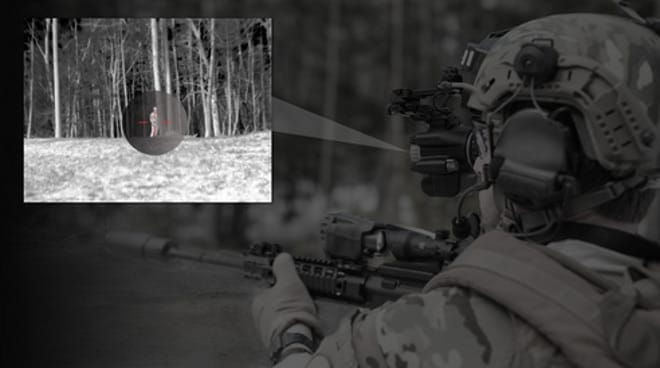 A mock-up of what a soldier using the thermal imaging system might see with a tethered set of smart goggles. (Photo: BAE System)

BAE systems landed a contract with the U.S. Army worth up to $434 million to develop a night vision riflescope that transmits video to a linked set of wearable goggles that would let soldiers shoot from cover and around corners. BAE will be working with the Army Night Vision and Electronic Sensors Directorate on this joint project.

“Under the U.S. Army’s Enhanced Night Vision Goggle III and Family of Weapon Sight-Individual (ENVG III/FWS-I) program, BAE Systems is currently qualifying and initiating production of the integrated night vision targeting solution for deployment to the field,” BAE said in a statement.

The idea to transmit video from an optic to a set of goggles or glasses is still pretty new and this would be the first significant night vision system to make it work with night vision systems. The contract is looking for a thermal weapon sight that doesn’t use any projected illumination such as an infrared laser to assist aim.

“Supplying the U.S. Army with this new rapid target acquisition technology builds on our heritage as a long-time provider of thermal weapon sights and precision targeting solutions,” BAE’s Terry Crimmins told Business Insider. “The ability to conduct surveillance in any light or weather condition increases mission safety and effectiveness.”

But can it be detected with now-common infrared camera systems – even cheap electronics can identify and locate the source of infrared laser pointers. By transmitting the video from the scope to the shooter’s eye, not only does the soldier not have to have a perfect sight picture to get on target, the shooter doesn’t even need to get behind the rifle to put rounds down range with accuracy while remaining covert.

TrackingPoint was the first big name in the industry to accomplish this with commercial optics with its ShotGlass system. It was only a matter of time before the concept was developed for military application.

Thermal vision obviously comes in handy at night and other dark locations but it can also be used to see through smoke or inclement weather. The contract calls for wireless real-time transmission of the video to the goggles and wants the system to have low power requirements for extended battery life.

Additionally, BAE Systems has been tasked with making the video high-resolution to increase soldier ranges beyond standard vision. With high-resolution sensors, the video can be zoomed in on for digital magnification, like with many digital cameras.

The Army and BAE Systems also want the whole system to be lightweight to reduce the load on soldiers. When it comes to mounted accessories, weight adds up fast on rifles and helmets.

Aiming systems like these are only going to get more common as the tech gets smaller and cheaper. Not just with militaries, but also with private shooters and hunters. In a few years’ time, we won’t be surprised to see that with many powered optics, there will be an app for that.