A man shot and killed an intruder who had unlawfully entered his Pleasant Grove, Utah, townhome early Sunday morning, and while authorities said alcohol definitely was a contributing factor, the deceased man’s roommate said he was simply confused and the homeowner did not have to use lethal force.

According to reports from a local Fox affiliate, the homeowner and his wife were awakened just before 6 a.m. to a loud banging at their front door.

The homeowner grabbed a .40-caliber handgun and went to see what the commotion was about, but by the time he got to the door, the man outside had climbed up onto a second story balcony and continued to knock at that door repeatedly. The homeowner then went to the balcony door and attempted to open the door slightly just to talk to the man outside, but once the door was open, the man forced his way inside the townhouse.

“And that’s when the homeowner – not knowing why he was there, what his intentions were, fearing for his safety and his wife’s safety – fired a round,” Lt. Britt Smith with the Pleasant Grove Police Department said.

The single shot struck the intruder in the chest, and while waiting for first responders to arrive, the couple administered aid to the man. He was transported to the hospital, but died during surgery. 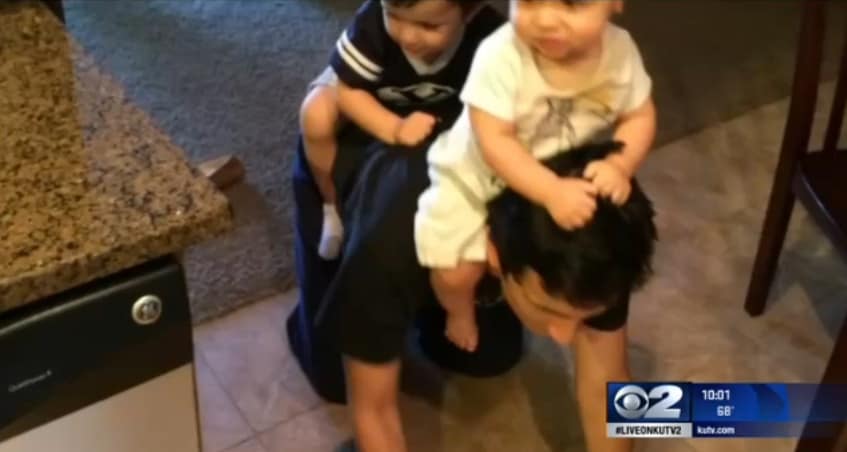 Christian Chichia was the father of two young children with another child on the way. (Photo: KUTV)

The intruder was later identified as 24-year-old Christian Chichia, who lives with several roommates in a townhouse a few buildings over. The initial investigation indicated that Chichia and the homeowner were unacquainted.

Smith, who called the incident tragic, said “alcohol was definitely a factor,” but also reiterated the homeowner did not know Chichia’s intentions when he forced his way into the home.

Chichia’s roomate, Carlos Vazquez, told KUTV they had all been watching the Mayweather fight that night and had been drinking. “He was simply confused, intoxicated, and thought he was at his house,” Vazquez said.

Chichia, who had only lived in the complex a couple of weeks, had apparently walked a friend outside around 5 a.m., but didn’t return. Both Vazquez and Smith pointed at that every condo in the complex looks almost identical, and Vasquez added that in the past they had discussed using the balcony door as a way to gain entry if any of them were ever locked out of the house.

Vasquez feels the homeowner should not have shot Chichia.

“If you’re so scared for your life, would you not think, ‘I’m going to go lock myself in a bedroom, I’m gonna lock the door, I’m gonna call the cops?’” Vazquez said.

Records indicate that Chichia had prior offenses, the majority of which were alcohol-related, but did not have a history of violence.

Nonetheless, Smith said no charges have been filed at this time, and ultimately the decision for any charges will fall on the Utah County Attorney’s Office. But Smith also stated, “You have the right to defend yourself.”