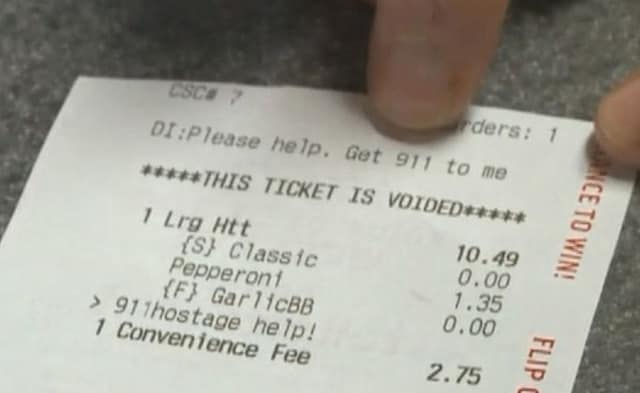 A woman who, along with her three children, was being held in her Avon Park, Florida, home at knife-point by the father of her children saw an opportunity to call for help when the man momentarily handed over her cell phone to let her order a pizza. And the worker who received the order got a sinking feeling when she saw the message attached to it.

“I was kinda scared,” said Pizza Hut Chef Alonia Hawk. “I was scared for the person.”

Cheryl Treadway, who the workers recognized as a regular customer, typed “Please help! Get 911 to me” within the order, and again in the comment section pleaded, “911 hostage help.”

Manager Candy Hamilton said they immediately called 911, and within minutes, a hostage negotiator was at Treadway’s house.

Eventually, the woman and three children were freed, and the suspect, Ethan Nickerson, was taken into custody. Nickerson now faces charges for aggravated assault with a weapon without intent to kill, battery, false imprisonment and obstructing justice by depriving communication to law enforcement.