Lantac's got a new 9mm Dragon 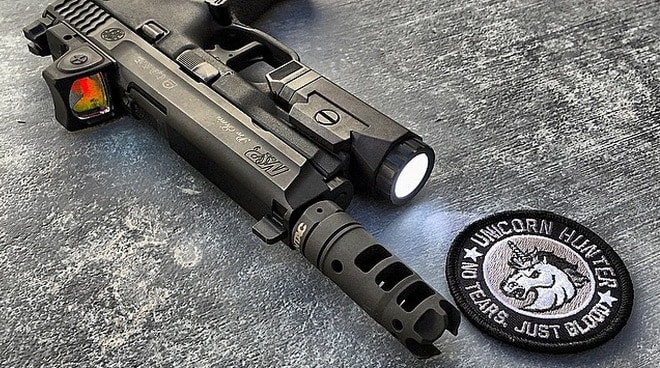 Lantac is introducing a fourth model of Dragon muzzle brake, updated for 9mm pistols and carbines. The new Dragon has 1/2-36 threads, which is used for many 9mm carbines.

The Dragon brake pattern quickly developed a strong user base and has a great reputation for controlling the muzzle without pushing it up or down, even with rapid and fully-automatic fire. It’s popular with shooters of all stripes but its biggest following is with the black rifle crowd.

It doesn’t hurt that the Dragon just looks good, too. It has clean lines without hooked or pronged baffles to snag or catch on stuff in the field with three square baffles to arrest rearward movement and four small ports on top to stop muzzle climb. The Dragon isn’t a flash suppressor and it won’t eliminate the visual signature of a rifle or pistol, as far as muzzle brakes are concerned it’s not bad and isn’t associated with throwing big fireballs.

Like a lot of newer tactical accessories, it’s got a hard nitride surface treatment with a quench-polish-quench finish. The device itself is steel. Because of the larger inner diameter it weighs a little less than the other Dragons at 2.8 ounces. It’s 2.7 inches long and has a .9-inch outer diameter.

Right now the 9mm Dragon is on sale on Revolver and according to AR-15 News it should soon be available over at Rainier Arms. At $124 it’s definitely not a budget part, but there are plenty out there who will tell you it’s worth every cent. Even at that price point the 9mm Dragon will make a lot of people happy.