Prom picture with guns, confederate flag has residents in an uproar (VIDEO) 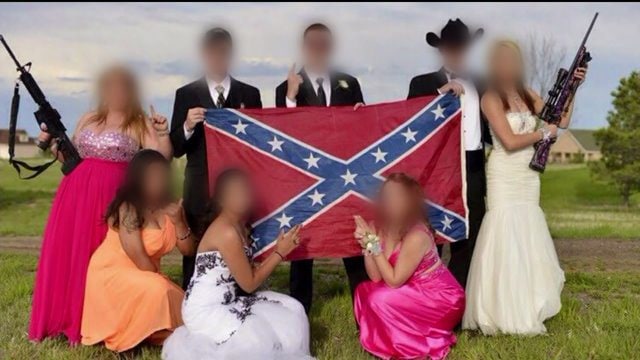 Some say the photo borders racism, but others support the teens’ right to take the photo. (Photo: Fox 31)

A group of Colorado teens have caused quite a stir after a photo was posted to social media over the weekend showing the group as they got ready to attend their high school prom. While the teens are dressed for the occasion, the girls with polished nails and flowing dresses and the boys in suits and ties, it’s a couple of extra accessories that’s causing the controversy – two rifles and a large confederate flag.

The teens were on their way to Chaparral High School in Denver, but a mother of one of the boys, who talked with a local Fox affiliate about the photo but did not wish to be identified, said the photo was taken at a home in Elizabeth. She said her son was unaware that the props would be used beforehand.

“When he got out there he was surprised that guns were brought out and the Confederate flag was brought out,” she said.

The woman also said she’s upset with her son, but more disturbed by the fact that there were other parents at the home supporting and encouraging the activity.

While the teens and the parents involved may not have necessarily done anything illegal, it certainly has upset some in the community.

“Even if it is southern pride, we’re not in the south, we’re in Colorado,” said University of Colorado-Boulder student Mairenn Digeorge, who came across the photo in her Facebook feed.

Digeorge said the teens should have known what the flag stood for before using it in the photo.

“The image is pretty disturbing, especially if they have real assault rifles in their hands. Not to mention, the Confederate flag and its legacy of white supremacy, Klan violence and the Jim Crow South,” said Arturo Aldama, an ethnic studies professor at the University of Colorado-Boulder.

It’s not known if the teens removed the picture from the social media website, or whether they will face any disciplinary action from the school.