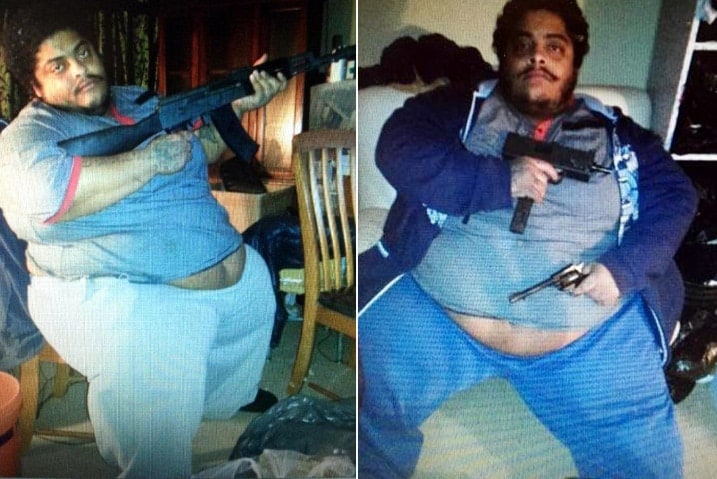 “Wobbles” appears to have a whole lot of tattoos, but not too much trigger discipline.

According to a statement issued Wednesday by Attorney General Eric Schneiderman and Police Commissioner Bill Bratton, the takedown, dubbed “Operation Redrum” after the group’s 33-year-old ringleader, William “Redrum” Soler, who is also known as “Wobbles,” led to the recovery of 93 illegal guns, which ranged from .22 caliber handguns to assault weapons and a full-auto machine pistol.

Eleven of the guns had their serial numbers filed off, which Schneiderman said indicated their intent to be used in a crime. Authorities are working to trace the origins of the weapons.

A portion of the guns were apparently purchased in Port Chester, New York, and Stamford, Connecticut, and were brought into the city through the public train system. Once in New York City, the guns were sold for “several times their original price.”

Schneiderman said, “These allegations lay out a disturbing, but all too familiar pattern of multi-state gun trafficking and violence,” but added that authorities will remain vigilant in reducing the business of illegal gun trafficking and subsequent violence which follows.

“Make no mistake, illegal guns sold in our communities will eventually destroy someone’s family,” Bratton reiterated, and added that authorities are committed to saving lives.

Soler, along with Devon “Burnz” Fairburn, 27, allegedly ran a faction of the Bloods gang know as “Redside,” which operated in the Bronx, Brooklyn, Queens and Westchester County, as well as parts of Maine, and other places.

All were charged with felony conspiracy, criminal possession and criminal sale of firearms counts. In addition, Soler was also charged with conspiracy in the second degree for his part in plotting to kill a rival gang member, and Ransom had a separate indictment on murder conspiracy. Five of the 10 suspects are facing 25 years or more in prison.

A local ABC affiliate reported that Soler did not appear in court, due to health issues.

Soler’s attorney, Brian Sullivan, said the charges are “pretty large-scale” and he’s concerned about his client going to prison because of his size. Soler apparently weighs more than 500 pounds.

“I would think being a very large person would put him at a big disadvantage [in prison] because the cots and the clothing are all not made for someday that large,” Sullivan pointed out.