10 things anti-gunners taught me about myself

If I search my soul, I’ll somehow magically admit that criminals will just stop trying to acquire guns once enough laws are in place. Much like the shootings that happen in gun free zones, like schools. If we only ban guns harder, criminals won’t get the guns. I also should realize that in the magical world of glitter and unicorns that is the United States, that criminals will most definitely go through a universal background check to get a gun. How could I be so callous to assume a criminal might steal a gun because they don’t want to undergo a background check?

I had no idea. I’m actually not a republican but I guess I need to buy my elephant shirt. I haven’t been a republican for a long time and I honestly am not sure what a “tea tard” is, but I’m sure it’s in reference to a tea party supporter. I’m a libertarian (and no, that isn’t a “weed smoking republican”, but nice try). I want less government than republicans and taxes infuriate me. I also think that homosexuals should have the right to marry. I know, I’m way out there, right?

8.  I need to move to Somalia where there are no gun laws

Somalian gun rights aren’t guaranteed. All weapons must be licensed and registered and no automatic weapons are allowed. That’s interesting. Sounds more like an anti-gunner that doesn’t want to take my guns might enjoy the peace and tranquility of Somalia. (And Somalia is the result of a failed socialist/communist regime.)

7.  I am much more likely to shoot myself than I am to defend myself

I have shot thousands of rounds out of dozens of different weapons and not once have I ever come close to shooting myself or another human. I know how to handle a firearm and I know the safety rules involved. Anti-gunners tend to think that guns are not used ever in self defense situations.  Illinois’s new concealed carry law is already saving lives. 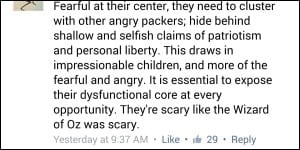 Not only is this blatantly false, it’s laughable. Some people, like me, own guns for hobbies. I enjoy shooting–I find it to be stress relieving. I do not wish death on anyone nor do I fantasize about ever having to use my weapon on a person. I hope it never comes to that, but guns are a great defensive tool and can be used to level the playing field if another person is violent toward me.

5.  I hate the government and have an irrational fear of them shooting me 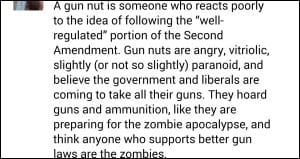 Ok. Fair enough. That is pretty accurate actually. I dislike almost every single aspect of the government. They steal money in the form of taxes and constantly write laws to restrict our freedom. The only reason I fear being shot by the government is because democide is the number one killer of all humans in the history of planet earth (other than natural causes of course). Adolf Hitler was a government official that banned guns them committed democide. I really don’t want to go down that fascist path again.

Apparently owning a gun means I hate women. I probably pay women less too. I had no idea that I hated women and elect women hating officials. I actually prefer women to be armed in order to level the playing field in the event of an attack. Plus I am, in fact, a woman. I do not hate my gender. Please don’t confuse this as a hatred for men either because I am an egalitarian, not a feminist. But women are by nature most often, the weaker gender so it would make sense for them to be armed.

3. I am “phallically challenged”

Because I own a gun, I have a small penis. This one surprises me since, as I just mentioned, I’m a woman. I was not aware that I even had a penis. But if an anti-gunner says it, it must be true. I should try to find this small male genitalia I didn’t know I possessed.

2.  I am an old white man and scared of my shadow

I’m actually not scared of anything (except democide) because I carry a gun at all times. I am white, but I’m not old, nor am I a man. But see #3 for reference. It’s interesting that an anti-gunner is allowed to profile a gun owner based on nothing else, but a gun owner is automatically a terrorist. 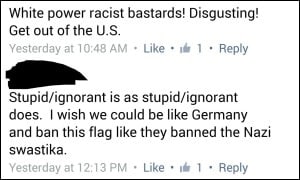 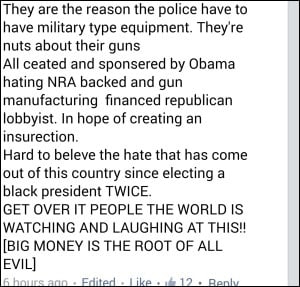 This actually offends me the most, but luckily I am aware that exercising my Second Amendment rights doesn’t mean I can get so offended I shoot someone. It means I can protect myself from those that get so offended that they start shooting.  I’m not sure how the simple act of owning a gun means I hate everyone not like me, but somehow it does if you ask the anti-gunners.

And that completes my list of the 10 things anti-gunners have taught me about myself. I’m still amazed at a few of them. I shouldn’t be, you would think old arguments would get boring to regurgitate, but hey, if it’s not working, you are probably an anti-gunner.