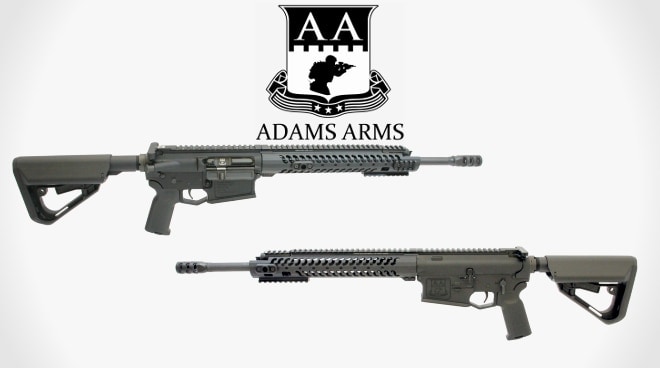 Adams Arms is adding a new model of piston-driven .308 Winchester AR-10-style semi-automatic rifle to its catalog with the Patrol Battle Rifle. This new carbine has a free-floating modular handguard and compact 16-inch barrel that helps keep the weight down to just a hair over 9 pounds.

The Patrol Battle Rifle is light without resorting to extremes and has mid-length gas system and matching handguard. Adams Arms went with its full-height railed gas block and Samson rail with a cutout for a longer grip.

The rifle uses Adams’ established short-stroke piston-driven gas system. The gas block is adjustable for use with suppressors and railed for irons. Railed gas blocks offer a small advantage over handguards as far as iron sight mounts are concerned in that they will provide a slightly more accurate sight picture as the barrel heats up. The only downside is that they can’t host polymer sights that can warp or degrade through heating and cooling cycles.

Adams has gone with solid accessories across the board putting together the Patrol Battle Rifle including an enhanced SOPMOD telescoping buttstock and upgraded Magpul MOE K2 pistol grip. Iron sights are extra, leaving the decision up to the individual. Adams will include a set of Samson sights for a little extra. The rifles ship with a 20-round magazine, standard.

Other nice touches include their LifeCoat finish on the bolt and bolt carrier, which is a polished physical vapor deposition or PVD coating on top of an electroless nickel plated base layer that’s not only incredibly durable and wear resistant, but also has extra lubricity compared to traditional finishes like parkerization.

Another nice touch is an enlarged “kidney” ejector in the bolt for more reliable ejection. Adams calls it a Brass Saver design that’s made to be reliable and kind to cases, a nice touch for reloaders. A lot of rifles chambered for .308 Winchester and 7.62 NATO can really put the screws to cases, which can be a real drawback for anyone who rolls their own ammo.

The carbine is fit with a 16-inch barrel manufactured for Adams by its sister company, Voodoo Innovations. These Voodoo barrels have a nitride Melonite finish to match the 3-baffle muzzle brake. These are some of the softest-shooting .308s on the market and the muzzle brake is part of that reason.

The base model .308 Win. has a fixed Magpul MOE handguard and A2-style flash hider. (Photo: A.A.)

The new Patrol Battle Rifles are priced at $1,775, which is about right given the suite of accessories attached. If you’re looking to save a little scratch its less expensive Patrol Enhanced carbine is available again and priced at $1,488. Just the same Adams has sold out of its .308s before so if you were thinking about picking one up you might want to step on it because you don’t want to let this opportunity pass you by.

Whether you’re looking for an AR-style rifle with a gas system for range use, duty, self-defense or hunting, these guns are tops for practicality and reliability. If you’re in the market for a semi-auto .308 keep Adams Arms on your radar.