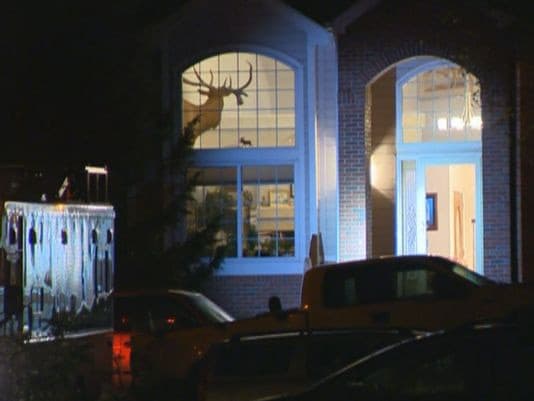 “You see a giant elk head on the wall… next to a gun safe, you’ve got to know the guy’s probably packing,” one neighbor pointed out. (Photo: ABC)

A Colorado teen is dead after he broke into a Boulder home Monday night and attacked the homeowner, and according to authorities, the suspect had tried to break into several other homes in the neighborhood that same night, banging loudly on doors and windows while yelling.

The couple said they were watching television around 8:40 p.m. when they heard loud banging at a window in the back of their house. The female resident went to call 911 and the male resident grabbed a gun.

Moments later, the suspect had made his way to the front of the home and began banging on that door instead, but eventually shattered the glass and forced his way inside.

“I watched him go head first through both doors,” Brock Derby told a local ABC affiliate. “Of all the houses to break into here, I think that was the worst to break into.”

Derby said the homeowner is an avid hunter and obviously has guns in his home.

Once inside, the suspect attacked the homeowner and knocked him to the ground. The homeowner told authorities that as the physical altercation ensued, he feared for his life and opened fire, striking the intruder a single time in the chest.

When police arrived, the suspect was found dead inside the home. He was later identified as 19-year-old Roberto Zamora. It doesn’t appear that Zamora had a prior criminal history and he was not acquainted with either of the residents.

The couple, whose names have not been released, was interviewed and said to be cooperating fully with the investigation.

No charges have been filed against the homeowner, and while ultimately the decision will be placed on the District Attorney’s Office, the initial investigation indicates that the case could likely fall under the state’s Castle Doctrine or Stand Your Ground Law, which in Colorado is known as the “Make My Day Law.” The law protects residents from being charged when lethal force is used in self-defense.

Authorities did not say what they believed was the motive for the home invasion.