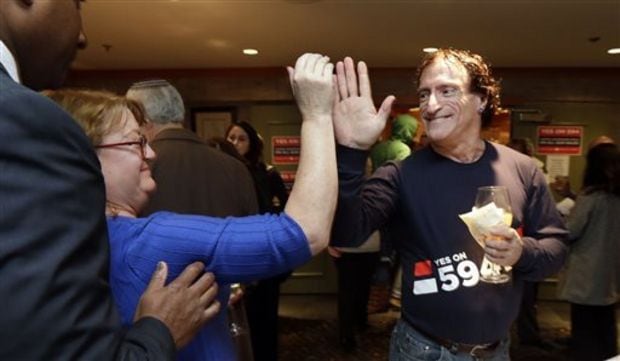 Gun control advocate Cheryl Stumbo, left, celebrates the passage of I-594 last November. She was added as a defendant to a lawsuit by Second Amendment groups that was dismissed this week. (Photo: AP/Elaine Thompson)

U.S. District Court Judge Benjamin H. Settle on Thursday issued an order to dismiss a suit brought by a number of Second Amendment advocates on the controversial I-594 ballot initiative passed last November.

The suit, filed just weeks after the 18-page referendum was approved by voters by a 9-point margin, was brought against state Attorney General Bob Ferguson and Washington State Patrol Chief John Batisteby by groups to include the Second Amendment Foundation, the Northwest School of Safety and the Firearms Academy of Seattle.

Although not originally named as defendants, the court later allowed a coalition to include gun control advocate Cheryl Stumbo, as well as the Washington Alliance for Gun Responsibility and the Everytown for Gun Safety Action Fund to join.

This week Settle, a 2007 appointment by President George W. Bush, granted a motion by the Attorney General’s office to dismiss the case outright on the grounds that the new law did not harm the plaintiffs.

While citing that the “fairness” of I-594 tenets “may definitely be questioned,” Settle wrote, “the Court has considered the pleadings filed in support of and in opposition to the motion and…hereby grants the motion and dismisses Plaintiffs’ claims without prejudice…”

This news brought immediate welcome from the gun control groups who fought to be allowed into the suit.

“Today is a tremendous victory for the people of Washington, whose decision to close the background check loophole has been upheld,” said Everytown’s Cheryl Stumbo in a statement emailed to Guns.com. “From the beginning it’s been clear that the gun lobby’s lawsuit was a case of sour grapes — and that their frivolous claims would be dismissed quickly and completely. Now, it’s time for the gun lobby to accept the court’s decision and the will of the people of Washington and abandon its bid to overturn Initiative 594.”

Meanwhile, the gun rights organizers who brought the case were struck by the decision.

“It is mind boggling that a law-abiding citizen evidently must put their civil rights, not to mention their clean criminal record, at risk before a court can rule whether a law is constitutional,” Gottlieb said in a statement emailed to Guns.com. “It is definitely unfair, and we believe every American will think it unfair that someone has to be chained and incarcerated before they are allowed to challenge an attack on their constitutional rights.”

Gottlieb stresses that the plaintiffs in the case will likely pursue an appeal to the U.S. 9th Circuit, which has a mixed record on gun rights cases in recent years – but is offering a way out for all involved.

“However,” Gottlieb said, “If the state is willing to sign a consent decree that they will not prosecute any citizen under I-594 who is not prohibited from owning firearms, we will consider not filing an appeal.”