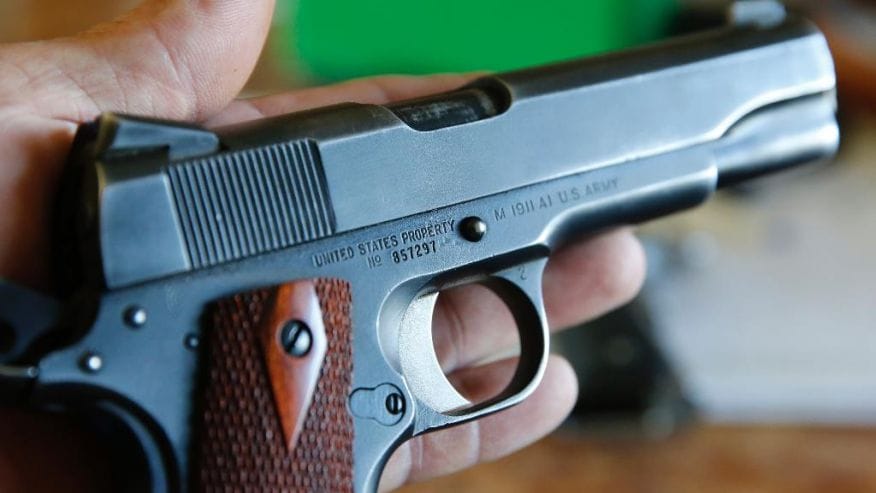 An investigator for the Wyoming Livestock Board poses with the M1911A1 he received through a Department of Defense surplus program. As many as 100,000 of these guns could soon be up for sale through the CMP. (Photo: George Frey/AP)

An add-on to the upcoming National Defense Authorization Act that passed committee includes a plan to transfer the U.S. Army’s remaining stock of .45 ACP 1911A1 pistols to the Civilian Marksmanship Program.

Added as an amendment by Rep. Mike Rogers, R-Alabama, while the NDAA was in debate in the House Armed Service Committee, it could see potentially the largest remaining stock of military surplus World War II-era handguns in government hands sold to the public.

“As a gun owner and strong believer in the Second Amendment, my proposal is a common-sense approach to eliminating an unnecessary cost to the Federal government while allowing the very capable CMP to handle the sale of these vintage firearms that otherwise would just sit in storage,” Rogers said in a statement.

The lawmaker disclosed that the military currently spends about $2 per year to store 100,000 Model 1911s that are surplus to the Army’s needs. While 8,300 have been sold or disposed of in recent years – largely through the controversial Department of Defense’s 1033 Program, which offers eligible law enforcement agencies up to one pistol per full-time officer – the guns still on hand have in many cases been stored since the 1980s when they were withdrawn from service in favor of the then-new Beretta 92F (M9).

The amendment would authorize the CMP, currently just limited to selling .30-caliber and .22-caliber rifles, to receive and sell any surplus military firearm. It would not cover any surplus 1911s held by other branches such as the Navy and Air Force, or those that may linger in federal law enforcement service. The Army guns are stored at the Anniston Army Depot, in a district which Roger’s represents and is coincidentally co-located to the CMP’s regional warehouse and store, which would minimize the logistics of a transfer.

“This amendment is a win – win for the taxpayer. I was pleased the amendment passed the committee and appreciate the support my colleagues on this proposal,” Rogers said.

The CMP is a federally chartered non-profit corporation tasked with promoting firearms safety training and rifle practice. It originated as the Office of the Director of Civilian Marksmanship in 1903 under orders from Congress to improve the country’s marksmanship skills to minimize training in case of war. Split off from the U.S. Army under the Clinton-administration in 1996, it still conducts training courses and holds shooting competitions nationwide but draws its primary source of funding through the sale of surplus firearms to qualifying members of the public which were donated to the organization by the Army.

However, the CMPs stocks of surplus arms are diminishing.

In 2010, the organization’s most numerous firearm, the M-1 Garand rifle was limited to just 125,000 guns on hand that included complete rifles, stripped receivers, and welded drill rifles. Since then, the administration of President Obama has repeatedly blocked efforts to bring surplus donated military rifles back from overseas allies looking to rid themselves of obsolete hardware.

An influx of 100,000 highly-collectable handguns, largely all made before 1945, would likely revitalize the organization, and ensure its work for years to come.

“Not only is this is an organization that is committed to training civilians in the proper, responsible, and safe use of firearms, but at a cost of roughly $2.00 per pistol per year to store these weapons, we were spending $200,000 a year in perpetuity,” said Rep. Steve Russell, R-Oklahoma, who voted for the successful amendment. “This sensible change will save the taxpayers millions over the years to come, as well as aid a great organization that serves the public.”

The National Defense Authorization Act is expected to come to the House floor in May.

Guns.com reached out to both the U.S. Army Tank-automotive and Armaments Command, the department responsible for storage of surplus munitions, and the CMP but did not receive comment in time for publication.