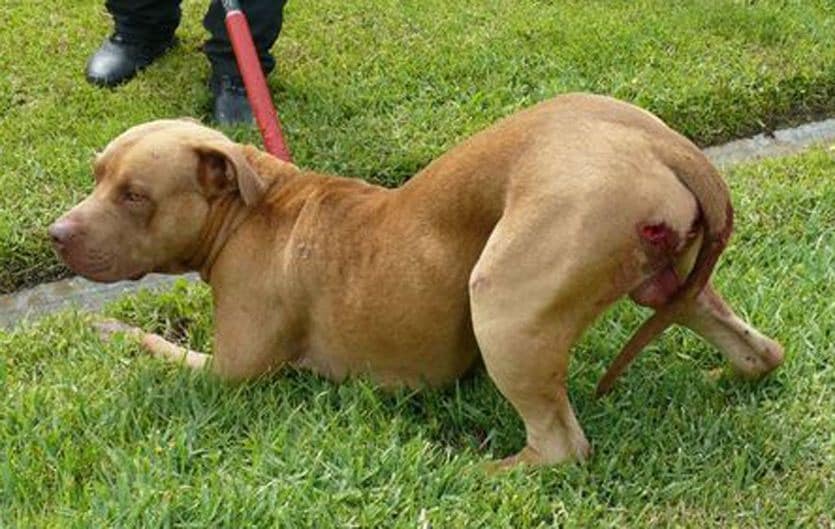 Following Monday’s attack, authorities discovered Nova was involved in another mauling last week, which went unreported out of fear that the dog would be euthanized. (Photo: ABC)

A pit bull is currently in quarantine and a Florida man in the hospital’s trauma unit after a vicious attack at the man’s Port St. Lucie home Monday.

Gina Day wanted to let her dogs outside, but her neighbor’s pit bull, Nova was in their adjoining back yard. Day asked her neighbor, Vincent Bacchus, to bring Nova in, but when Bacchus went to get the dog, the animal took an unexpected turn, as reported by a local ABC affiliate.

Day said Bacchus simply called to Nova, told him, “Hey man, come on, let’s go inside,” and the dog just turned and started biting him.

Initially, the dog snapped at his Bacchus’ groin, but then latched his jaws onto the man’s arm. And Nova saw no signs of letting go either. In fact, Bacchus ended up jumping over the fence into Day’s yard to get away from the dog.

While in Day’s yard, she and Bacchus began cleaning the wound left on his arm, but a short time later, they heard screaming, then discovered a gut-wrenching sight.

Bacchus’ 63-year-old roommate, David Brashear, was lying on the ground, and the dog was on top of him, tearing at his flesh. Day said there was a lot of blood, everywhere.

“He was just aggressive. He was just lashing out.” Day said of Nova, “There was a lot of blood. It was all down his arm and his side. He was pretty covered.”

Although Brashear was being brutally attacked, neither Day or Bacchus wanted to try to pull the pit bull off of him either. It was at that point, Day turned to Bacchus and told him she had a gun.

Day retrieved a 9mm, which she then handed over to Bacchus, who at first fired two warning shots into the ground. But the warning shots didn’t even seem to faze the dog, so Bacchus shot him in the butt, finally scaring away the dog so his roommate could get free.

Bacchus and Day rushed to help Brashear, who Day said was unable to get up at that point.

Bacchus and Brashear were transported to the hospital, where Bacchus was treated and released. Brashear was initially listed in critical condition, but is now expected to survive. The dog was taken by animal control and is currently in quarantine.

Apparently, Nova belongs to Brashear’s grandson, who lives at the home with him but has been out of town. They said the dog isn’t normally aggressive, but has been different since his owner has been away. In fact, following Monday’s incident, authorities discovered Nova had attacked another roommate, mauling him in the neck, last week. The man didn’t report the incident out of fear the dog would be put down. Something which, according to Port St. Lucie Police Sgt. Frank Sabol, is a fairly common occurrence.

“People might not report it because they might think it’s an isolated incident and it’s not going to happen again,” Sabol said.

No charges have been filed at this time and the fate of the dog is still unknown.