Grand Power pistols are making a comeback in the U.S. and the company is celebrating with this demonstration of how things are made back in Banská Bystrica, Slovakia. The manufacturer’s handguns have been imported by a few companies down the line but availability has been spotty until now.

Eagle Imports, the company backing Bersa, American Classic and Comanche Firearms, along with others, has partnered with Grand Power to bring all of their products to the American market. In the past, only select models of Grand Power pistols were brought to the U.S. and sold under other brands like STI.

Around the world Grand Power pistols are known for their quality and reliability. They have a very modern design that sports fully-ambidextrous controls, modular polymer frames and unusually, rotating-locking barrels.

Grand Power pistols stand out for a lot of good reasons, not the least of which is their very uncommon rotating barrel-delayed blowback action. Unlike virtually all of the handgun market, which uses Browning’s tilting barrel lock, Grand Power uses a rotating barrel recoil-operating system.

With these handguns the slide and barrel stay locked together after firing a round until the rearward motion cams the barrel free from the slide. This eliminates the need for a tilting barrel system that adds muzzle flip to the recoil impulse. Because of this Grand Power handguns have much less perceived recoil than comparable polymer-framed pistols.

Grand Power’s pistols showcase a lot of current design trends like their true ambidextrous controls. Unlike a lot of handguns that have some lefty-friendly controls but not others, Grand Power pistols have completely-ambidextrous safeties, magazine releases and slide stop levers.

True ambidextrous controls aren’t just nice for lefties, but practical shooters of all stripes. Being able to use guns strong-handed and weak-handed, with both hands or off-handed, knowing that the controls are universal, is a major advantage. 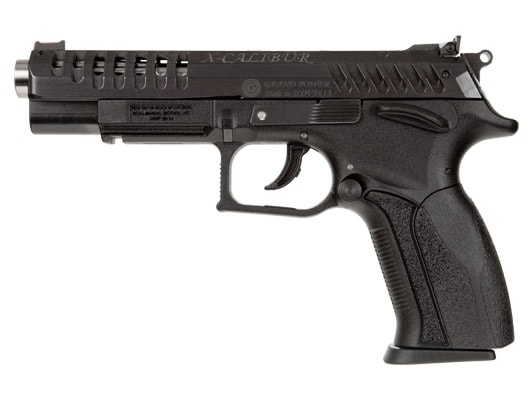 The Grand Power X-Calibur has full-adjustable fiber optic target sights, a fluted bull barrel and a complete action job in addition to the slide lightening treatment. These are serious guns for duty, self-defense and run-and-gun. (Photo: Eagle)

It doesn’t hurt in the least that Grand Power pistols are nicely-priced. These handguns are very competitive in the $500 to $600 range for the most part including some of the fancier models. The X-Calibur, the company’s flagship model, has a lightened hand-tuned trigger, fiber-optic target sights, fluted bull barrel and milled, lightened slide.

Eagle is importing the all of Grand Power’s full-size and semi-compact offerings at very affordable prices, and if you’re looking for something that isn’t your everyday pistol for whatever purpose you could imagine, you should have Grand Power on your short list. Eagle is dedicated to these guns and we expect the aftermarket to respond in kind.

Because these guns have been imported before, albeit in small numbers, there is a framework for good aftermarket support already in place. With Eagle’s help it’s only going to get better. You don’t have to take Eagle’s word for it, of course. See what Polenar Tactical has to say about Grand Power after their factory tour.

To see a complete list of imported Grand Power pistols head over to Eagle Imports.