It’s a rare occasion when the Washington Post and Reason Magazine agree on anything, but the absurdity of California’s gun policy had both media outlets buzzing recently.

As the Washington Post explains, the State of California deploys “armed agents in bulletproof vests” to make sure these people have parted ways with their guns. The state uses its database to actively search for registered gun owners who fall under these categories.

And like most of California’s policies, the success rate does not justify the cost. Back in 2013, in the height of the post-Sandy Hook gun control push, California lawmakers gave this already-failing program a $24 million boost.

The results were less than impressive. 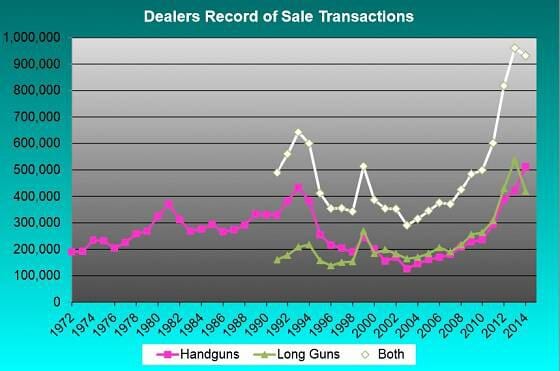 Both handgun and long gun sales have soared in the state of California since 2012. (California Bureau of Firearms)

According to California’s Department of Justice, 17,479 people remained on the list at the end of 2014, down from 21,249 people on January 1, and thousands of new names are added to the list every year. An astounding 40 percent of the $24 million allocated for this program has already been spent, and this doesn’t even include the potential lawsuits that could be filed against the state as a result of rights violations.

In fact, one of the many problems with this policy is that the wrong people are sometimes targeted in these broad gun sweeps. Everyone makes mistakes—especially government bureaucracies. Unsurprisingly, the government has been known to confiscate guns from the wrong people, who then have to fight to get them back.

Moreover, as the NRA points out, many of the people who are on the blacklist are not violent criminals. Interestingly enough, California hasn’t issued breakdowns of why the people on its list are blocked from owning guns. This seems more than a bit suspicious.

We can all agree that violent criminals and the mentally insane shouldn’t have guns. But why is the State of California wasting so much money to target more than just these demographics. There is no proof that it is reducing crime, nor does it make sense that it would have any effect. Where there’s a will, there’s a way, and if a criminal has their heart set on owning a gun, they’re going to get one on the black market or simply steal one.

As Reason Magazine notes, California officials “pride themselves on tightening the screws on gun ownership,” but despite the villainization of gun ownership, gun sales in the state have soared. In 2014, about one gun was sold for every 39 residents. Could it be that people still don’t feel safe and secure, despite California’s aggressive gun grabbing efforts?

Whatever the case may be, I don’t think anyone can rationalize the undeniable failure of these policies, which can only be traced back to the poor leadership. How much money will it take for California to realize that its gun control policies are both fruitless and harmful?

Perhaps the better question is: How far will the state go in the meantime?