Armed ex-boyfriend breaks into woman's house, gets shot with his own gun 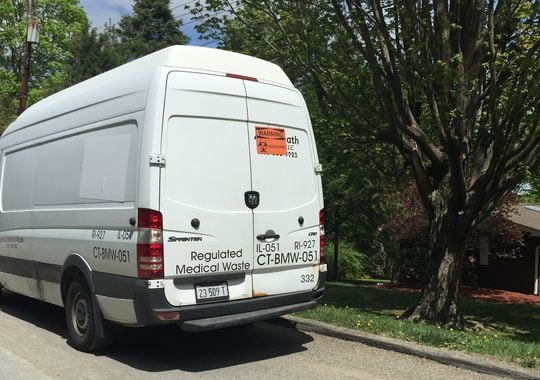 A medical waste van was parked outside the woman’s home Saturday afternoon, presumably for cleanup from the morning’s incident. (Photo: The Journal News)

Two New York residents were shot, one fatally, during a domestic dispute turned home invasion in Mahopac early Saturday morning. The woman was able to protect herself when she turned the tables and wrestled the gun away from her ex-boyfriend after he unlawfully entered her home.

Local law enforcement received two phone calls around 2 a.m., The Journal News reported. The 50-year-old woman, who will not be identified due to the nature of the crime, called 911 when she discovered her ex-boyfriend was trying to break into her home. Another resident, who lives in a unit in the building’s basement, also called the police when she saw the man armed with a gun and trying to get into her neighbor’s house.

Officers arrived within five minutes, but by that time the man had already forced his way into the woman’s home. During a brief struggle the woman was able to gain control of the man’s gun and she shot him.

The 47-year-old man was pronounced dead at the scene. His name has not been released, pending notification of the family. The woman was also shot in the leg and transported to the hospital where she was treated for the non-life threatening wound and later released. It is not known if the woman was shot by her ex-boyfriend or during the struggle for the gun.

Neighbors said her boyfriend was known by the sound of his motorcycle, but that the couple had not been together for at least six months. Catherine Cioffi, who lives next door, said she saw him drive in front of the home Friday afternoon, but the woman was not there at the time.

Cioffi also said the woman worked long hours in New York City, but was a great neighbor and a wonderful person who would always find time to lend a helping hand.

“She was the victim,” he said.