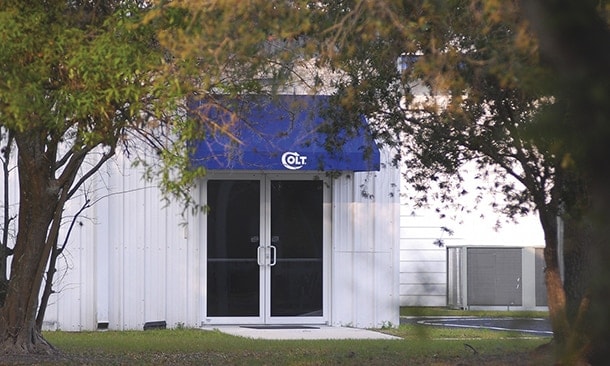 Colt’s Manufacturing Company and Osceola County, Florida ended a lease agreement Monday for use of this space. (Photo: Osceola News-Gazette)

More bad news for the ailing gun maker Colt as the company nears the deadline for bankruptcy, it may have to give up on its Florida home.

The Board of Commissioners in Osceola County approved a deal on May 4 to terminate its contract to lease a county-owned building to the company. The proposal details Colt immediately turning the building over to the body so the county can pursue another endeavor. In this case, opening a manufacturing research training center for Valencia College.

In order to repurpose the property, the county would agree to pay $150,000 to Florida for the state’s contribution to improvements made to the property. In addition, approximately $180,000 worth of building improvements were made by Colt.

Following the notice, the company invoked dispute resolution procedures that gave the parties 60 days to resolve the claims. Colt representatives have been extremely cooperative during negotiations, officials said.

If commissioners reject the settlement proposal already approved by Colt’s Board of Directors, the next step would be further negotiation or mediation.

Ultimately, the County could terminate settlement discussions and file an eviction suit. Officials said Colt could potentially occupy the building for many years without creating the 63 jobs that were at the heart of the original agreement, if the suit were unsuccessful.

Both parties have been negotiating an end to the 2011 agreement since January when Osceola notified the company that it had failed to create a manufacturing and regional headquarters facility at the Shady Lane facility in the time specified by the contract.

But a possible eviction is not the only thing on Colt’s plate. Last month, Colt enacted a plan to restructure debt by offering investors the opportunity to exchange old bonds for new, less lucrative ones due to payout at a later date. In order for the exchange to work, Colt would need nearly all of its bondholders to participate, per terms of a financial agreement. The deadline for the exchange was Monday.