Drawing a gun while taking care of a child

In previous articles we covered how to concealed carry around kids and other safety aspects to consider when carrying as a parent. In this article we’ll look at how planning and practice pair together to entwine parenting and concealed carry into a safe and responsible package.

When under an extreme amount of stress, the body reacts in one of three ways: fight, flight, or freeze. While pre-planning is advantageous to all of these, it especially helps those of us who tend to freeze. 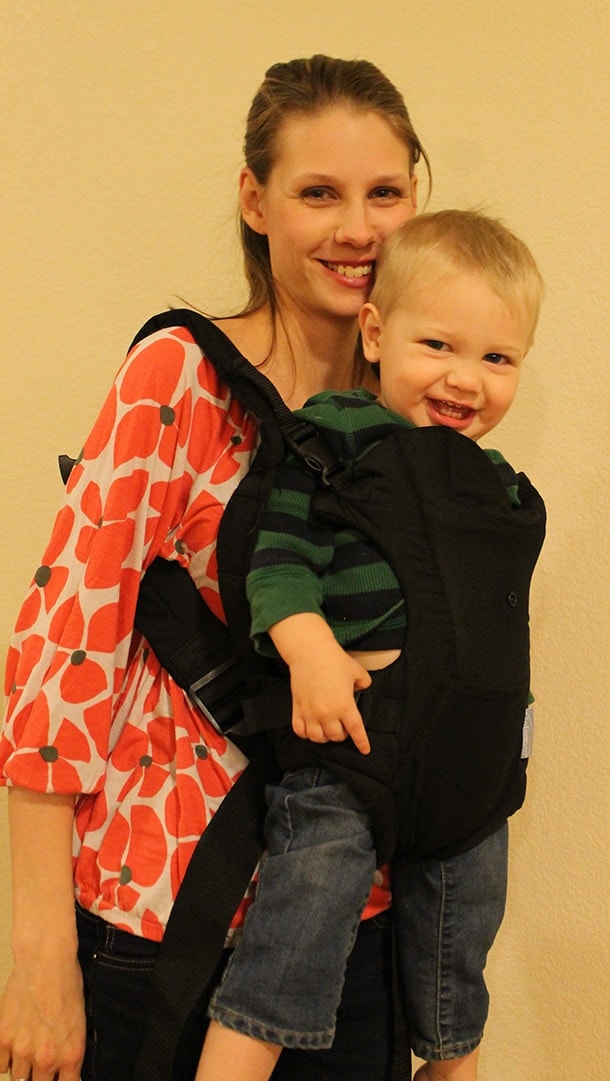 An emergency plan means knowing exactly how to most effectively and safely carry your kids in the event of an active shooter.

I won’t lie, I fall into this category. Get me into the unexpected and it takes my brain a few milliseconds to catch up. Not so bad when I am watching my sons throw toys into the toilet but a few lost milliseconds in a confrontation could have devastating results. Not willing to put myself or my family on the line, I trade my natural spontaneous nature for that of a planner.

It’s impossible to plan for every possibility. I’m not suggesting you try. We parents worry enough about what can happen to our kids. A little forethought, however, can give you that leg up as a concealed carrier and parent.

Take a few moments and think about the places you frequent most. Imagine the store layout. Pick out places of cover and concealment. Place the entrances and exits.

From there, focus on what you would do in an active shooter situation. If you were at the back of the store, where would you go if shots were fired? Would you ditch the cart or could you carry your kids? Would you run or stand your ground? Do the shelves provide cover or concealment?

Getting the lay of the land followed by answering these questions will help groom a concealed carry plan.  Brain freeze, and not the kind that comes after a tasty cold treat, can often be alleviated with a little planning on the front end. 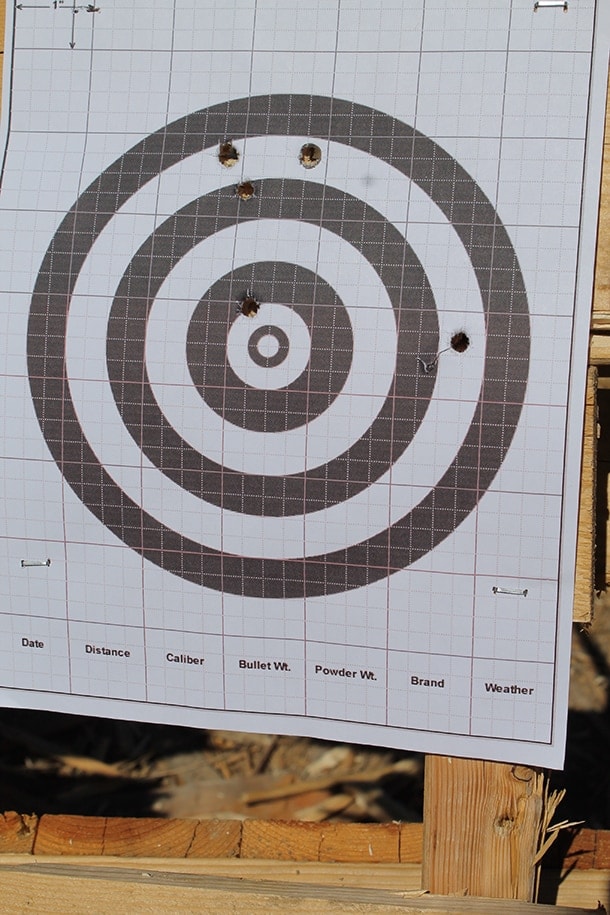 For defensive shooting, focus on accuracy (hitting the target on the paper) rather than precision (being able to group shots, consistently). (Photo: Jacki Billings)

Planning is important to prep your mind. Range time is essential to prep your body. To be effective and efficient in a confrontation, regular practice is imperative. That means hitting the range more than twice a year and focusing on defensive shooting while at the range.

Defensive shooting differs from target shooting and it requires a different skill set and mindset. To maximize time on the range, focus on accurate shots over precise shots. In this context, accuracy means landing shots where you aim, while precision refers to making repeated shots in the same area (groupings). In a defensive situation you want to hit the target where you aim rather than concerning yourself with groupings, which often take valuable time to achieve.

Keep targets simple with 8.5 by 11 inches paper, which are equivalent to center of mass. Concentrate on a consistent grip, good sight picture, and keeping all shots on paper. 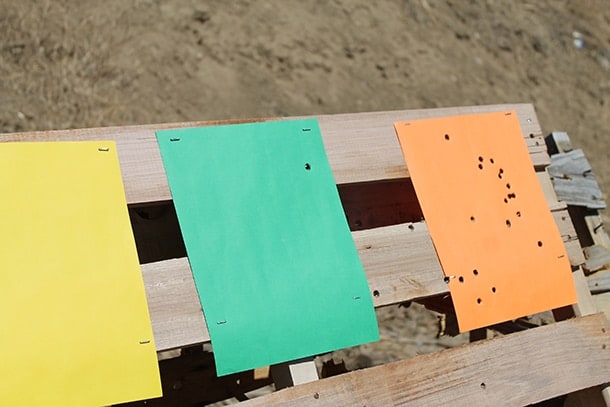 To spice things up, bring some colored paper and work on target discrimination. If a buddy accompanies you, have them call out colors. Focus on landing accurate shots on that color as quickly as possible. If you’re running solo, pre-record yourself naming colors, load these on an iPod or phone, and hit shuffle. Place one to two shots as quickly as possible on the color you hear.

If the range allows, also spend some time drawing from a holster and firing from various positions such as kneeling. Not every defensive situation is going to allow you to fire standing. Proficiency in a variety of positions will give you the leg up in an altercation.

Also remember to get some time in firing one handed. As parents, one hand is almost always tied up. Knowing how to effectively fire one handed will increase your chances of success. 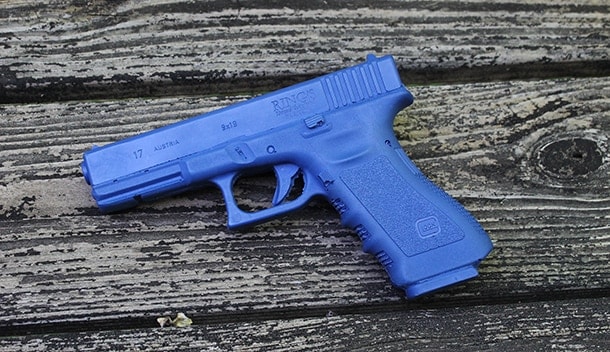 I’m a realist and I know that weekly trips to the range, especially if you have young children, can be near impossible. Range, ammo and babysitter fees can feel like a small fortune. Luckily there are at home practice options that can complement range time.

The first and least expensive is a training gun. These inert training aides are simply plastic replicas of firearms. Most firearm models are represented, so you can usually practice with what you carry. Prices range depending on what company and model you choose but they are often under the $60 mark.

These training aides don’t offer any other feedback, so drills for these are one-dimensional. Walk around the house with the kids and randomly draw the dummy gun. Assess the effectiveness of the position you’re in, noting where children are and make adjustments as needed. Rinse and repeat.

The second and more expensive option for training at home is to invest in a laser training system. I own both a SIRT laser trainer and three LaserLyte trainer cartridges. I swap between the systems depending on the drills. Neither is cheap (the SIRT retails for $239 and LaserLyte cartridges start at $105) but the advantage to these comes in the form of instant feedback and a broader range of drills. 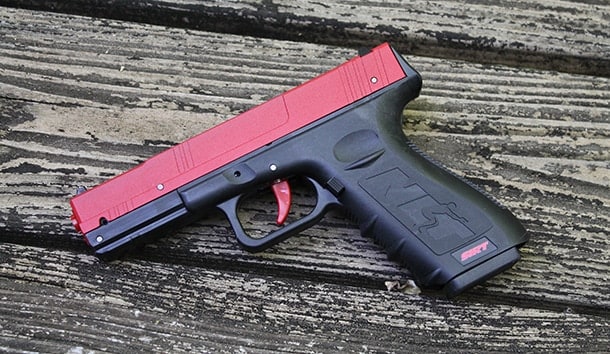 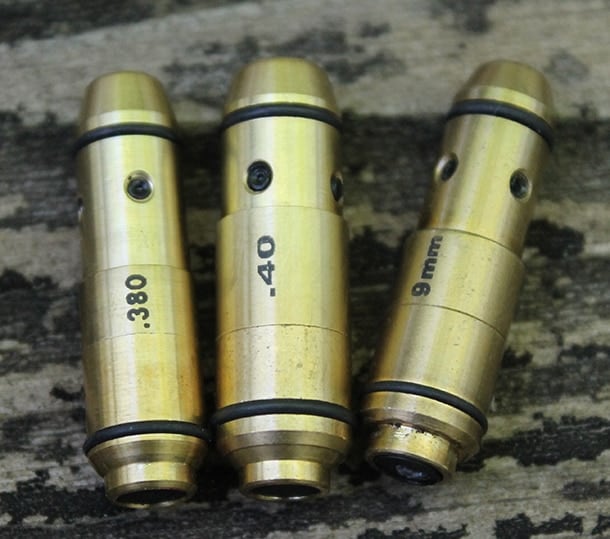 When using a laser system, focus on accuracy drills as well as shoot/no shoot scenario based exercises. The beauty of a laser systems is you can use the same drills you did on the range at home, meaning you can get that consistent training time in.

Adding to their depth, laser systems allow for shoot/no shoot practice. These exercises present a variety of potential defensive situations and you as the concealed carrier must react as you would in the real world. Not only are these exercises great mindset training, they can give you the opportunity to see the mindset of your family.

Armed Response offers a professional shoot/no shoot DVD loaded with scenarios, but if you want to keep costs down you can employ the help of a spouse, family member, or friend. Develop some scenarios of your own and act them out. Follow the scenarios with an evaluation of each family members’ performance and tweak your concealed carry plan as needed.

No one wants to draw their firearm in defense of themselves or their family; but developing and evolving plans while pairing these with practice will better prepare you in the event of the unthinkable.

Safety warning: Jacki Billings is a certified NRA instructor. Any methods or information described in this article is intended to be put into practice only by serious gun-owners with proper training.