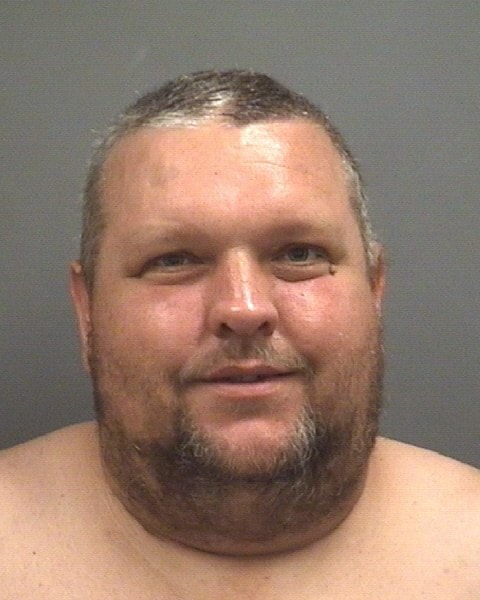 Brian Tracey Carroll was arrested recently for threatening his neighbor with an AK-47 while totally nude. (Photo: Rowan County)

Let’s just go ahead and file this one under “people I would not get into the van with”. A Mooresville, North Carolina man, 45-year old Brian Tracey Carroll, was booked on Saturday night shortly after 7:30 PM . The Rowan county man is charged with making threats and indecent exposure, that is, he threatened his neighbor with an AK-47 while naked and on a chair in his yard.

John Ault, a homeowner in Carroll’s neighborhood called the police Saturday afternoon to report Carroll was sitting in the backyard completely naked. As if that was not bad enough, Carroll was allegedly less than 30 feet away from the callers teenage daughter as she rode her horse.

When police arrived at Carroll’s home, he was still nude except for a towel around his neck. When they asked him why he was naked, he told police, “he p***** me off so I sat in that chair,” referencing his neighbor and the armchair he was sitting in and sounding like a total loon. After some more questions, he admitted to threatening his neighbor with an AK-47, telling him previously that he owned an AK and “knew how to use it”.

Carroll proceeded to tell law enforcement officers that he wanted to remain naked and refused to put on clothes while being taken into custody. (I bet if we banned public nudity, people wouldn’t sit outside nude…oh wait…). This becomes even more horrifying, to me at least, after eyeballing this guys mugshot and reading that the police report states that Carroll was “showing his private parts” and engaged in “full frontal nudity”.  Crank up the creep dial on this one.

When gun owners act like this, it really is not a surprise that some people want to erode our gun rights. I cannot even begin to imagine how this guy could think that making threats with his gun in the nude could possibly be a good idea, but then again, I guess I’m just the responsible gun owner type.  It would be nice, though, if we could all be on the same page on how to react to these situations as gun owners, so we don’t all look like loons.

Mr. Carroll in all his “Jabba the Hut” creepiness was released on a $2000 bond and is set to appear in court on June 8. He is definitely the poster boy for why some people believe guns should be banned. You won’t need to give it much time–I am positive the anti-gun groups will attempt to use this disgusting individual as an example to show how all gun owners act.  One reason why is because, sadly, Mr. Carroll is not the only naked gun owner to make the news this week.

John Clark of Amarillo, Texas reported gunfire to police on May 5 at about 10 AM. When Clark looked out his window, he noticed a man standing in the rain in the street. Police learned that the man in the street pulled a gun during a domestic disturbance. The woman involved was able to remove the gun from him. He then proceeded to remove his clothes piece by piece. Police took the man to the hospital after noticing blood on his hand and are deciding if charges will be filed.

Now, so much of this story does not make sense to me.  I am sure there is a lot more to the incident that may explain this or that, but it really doesn’t matter because when the words gun and something crazy in the same headline, people stop reading there.  Nonetheless, anti-gunners will always use moments like these against the rest of us somehow, so it is really up to us to never tolerate nonsense with a firearm.

So, in closing, here is some common sense for everyone: no gun laws would have stopped these two naked men from getting their guns. Sure, their attitudes alone would likely warrant them getting placed on the “can’t buy a gun” list, but oftentimes it’s the crazies that can come up with the most interesting ways to acquire a firearm.

Try not to assume all gun owners would threaten a neighbor with an AK-47 while naked–I’m pretty sure this was an isolated event.