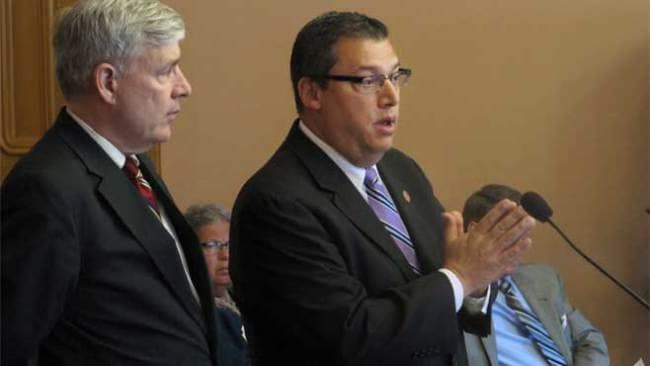 A bill that would allow for unlicensed concealed carry of handguns in the Buckeye State was heard last week in committee.

The measure, when coupled with Ohio’s already standing open carry laws, would grant those 21 years of age or older the ability under state law to carry a concealed pistol or revolver without a permit. It was heard in the House’s State Government Committee last week and has the backing of no less than 20 co-sponsors.

“This bill simply restores Second Amendment rights of law-abiding citizens to carry a concealed firearm in Ohio without having to first obtain the government’s permission in the form of a permit or license,” said Rep. Ron Hood, R-Ashville, the legislation’s sponsor.

Hood’s proposal, HB 152, eliminates the requirement to obtain a permit simply to carry a concealed handgun in the state so long as the carrier is not prohibited from possessing a firearm. Further, it has built-in language that prevents law enforcement from stopping a citizen who is carrying and hasn’t broken the law.

While the bill would allow for an unlicensed right to carry, it would not scrap the current permitting scheme which would remain in place for the benefit of those who desire a permit.

According to statistics from the Ohio Attorney General’s Office, the state currently has nearly 400,000 active permits, with 13,000 issued in the last quarter of 2014 alone.

However, gun control advocates are not thrilled with the prospect of these numbers expanding rapidly with unlicensed carriers should Hood’s bill make it into law.

“If this bill becomes law, it would be legal for stalkers, violent criminals, and people who have never handled a gun before to carry hidden loaded handguns on our streets,” said Michele Mueller, of the Ohio Chapter of Moms Demand Action in a statement sent to Guns.com. “This bill is dangerous for Ohio, and we urge lawmakers to reject it.”

Right to carry proponents in the state sees the bill as legislation that has been long in coming.

“If this passes, there will be no more need to go through an eight-hour class to receive your Ohio concealed handgun license,” Brett Pucillo, the president of Ohio Carry told Guns.com on Monday. “No more need to pay for or renew your right to carry a concealed firearm. As long as you are in legal possession of that firearm, you will be allowed to carry it openly, or concealed.”

Pucillo said his organization is pulling out all the stops and fully supports the measure, stating Ohio Carry “will do everything in our power to see it become a law.”

The measure also has the support of the nation’s most powerful gun rights group.

“Gun control groups funded by billionaire Michael Bloomberg are spreading misinformation around Ohio in a misguided attempt to kill legislation that protects the Second Amendment rights of law-abiding citizens,” National Rifle Association spokesperson Catherine Mortensen told Guns.com Monday. “Under this legislation, violent criminals are prohibited from owning a firearm and any assertions to the contrary are false. In the three states that have implemented similar laws their murder rates have declined.”

Mortensen advised that in Alaska, for example, the murder rate dropped 23 percent, 16 percent in Arizona and 8 percent in Wyoming, since adoption of constitutional carry measures.

The concept at hand in Ohio has proven a popular item nationwide with state legislatures this session.

In March, Montana and West Virginia lawmakers gave their final seal of approval to measures to bring the practice to those states, only to meet with vetoes from Democratic governors who cited safety concerns as a reason to torpedo the reforms.

Then on April 2, Gov. Sam Brownback signed a bill to make Kansas the sixth state to the constitutional carry club started by Vermont and joined by Arizona, Alaska, Arkansas and Wyoming in the past generation.

Should Ohio’s measure make it through the Republican-controlled committee and onto the floor, where the GOP counts a two-thirds majority of seats, it would have to navigate the state Senate which has an even more commanding number of red seats.

If successful in the legislature, it would have to earn the signature of Republican Gov. John Kasich to become law.