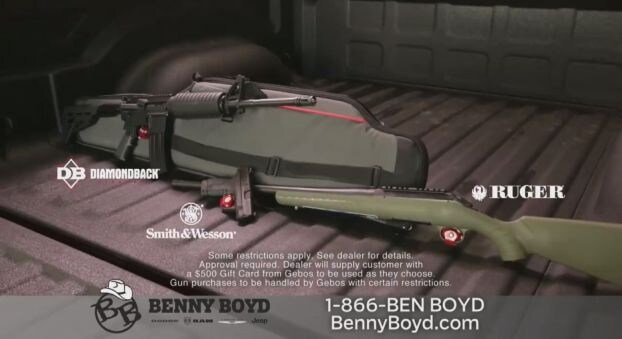 The car lot’s manager said if the promotion goes well, they will keep it running longer than planned. (Photo: Facebook)

The owner of an Andrews, Texas, car dealership is offering an incentive to purchase a vehicle from his car lot: A free gun.

But Colbath also stated the dealership isn’t just handing out firearms at the car lot either. The dealership negotiated with Gebo’s, a local farm and ranch supply store, on the price of the guns offered in the promotion, and customers are given a $500 gift card which they can then take to the store and purchase the gun of their choice.

Colbath also pointed out that those who take advantage of the promotion still have to abide by all gun laws and conduct a background check, “because sometimes bad people buy cars.” In addition, customers will be required to pay their own sales tax.

The promotion, which runs through the month of May and into June, was simply a way to set the dealership apart from others and celebrate Second Amendment rights.

Manager of Gebo’s, David Corley, said he supports the method for bringing in business, all the while promoting gun rights.

“I thought it was a great idea,” Corley stated, “because we’re always promoting our gun sales, and 2nd Amendment Rights, and that’s what he was shooting for.”

However, if anyone who is not a gun enthusiast still wants to purchase a vehicle from Benny Boyd’s, there are other options for participating in the promotion.