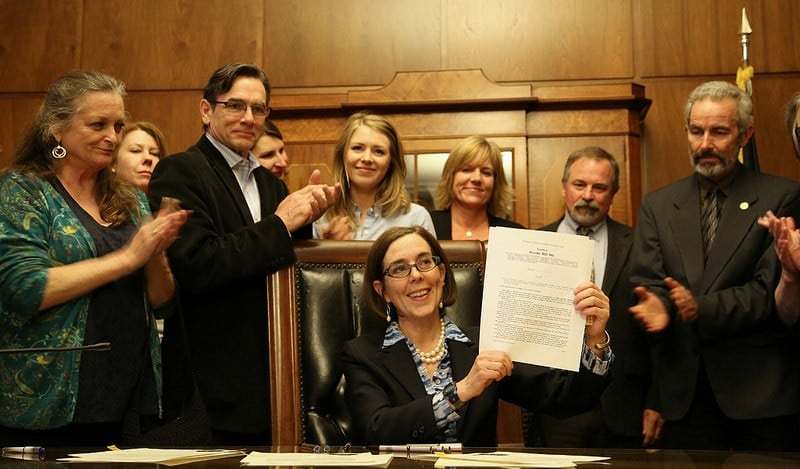 Keeping her promise to gun control groups, Democratic Gov. Kate Brown signed legislation Monday that makes the state the most recent to adopt expanded background checks to include most private gun sales.

The measure, which passed the Senate by a 17-13 party line vote in April and has seen much public debate, squeaked through the House by a 32-28 vote earlier this month on the same day Brown advised she would sign the measure.

“We have an obligation to protect Oregonians from gun violence,” Brown said at Monday’s signing ceremony to a crowd of assembled Democrats and gun control advocates. “If we want to keep our kids, schools and communities safe, we must make it harder for dangerous people to get guns.”

The bill that is now law, SB 941, requires that all private gun sales take place through licensed firearms dealers who would perform background checks. There are some narrow exceptions for family transfers, loans at shooting ranges, law enforcement, and – in some cases – inherited firearms, but disregarding these, all others must go through a dealer. Further, state law requires that the thumbprints of the purchaser be kept on file with the dealer for at least five years following the transfer, and be made available to law enforcement upon request.

Under federal law since 1993, all sales through licensed dealers have had to complete a background check through the Federal Bureau of Investigation’s National Instant Criminal Background Check System (NICS). Since 2000, all gun sales at gun shows have been mandated to undergo similar checks under state law. Now the new law will require checks on those transfers not covered in the past two expansions.

Although dubbed the Oregon Firearms Safety Act, Gun rights advocates saw the move as having little to do with real public safety.

“Keeping guns out of criminal hands is important for all of us,” Alan Gottlieb, chairman of the Citizens Committee for the Right to Keep and Bear Arms, told Guns.com. “The problem is this legislation criminalizes lawful behavior and real criminals will continue to get firearms because this legislation does nothing to get those who commit violent acts off our streets.”

Gun control organizations, who funded polls, studies and candidates in Oregon to help put SB 941 in front of Brown, were on hand Monday afternoon at the signing ceremony.

“Today is a day to celebrate,” said Anneliese Davis, with the Oregon chapter of Moms Demand Action in a statement. “This afternoon Governor Kate Brown signed legislation that puts the safety of Oregonians ahead of the interests of the gun lobby and closed the loophole that made it easy for dangerous people to get guns in our state.”

Oregon is now the eighth state that mandates Brady checks for most private gun sales, five of which have adopted the practice since 2012.