Do you like Rangers? Explosions? How about boobies? Best of three? Article 15 and Ranger Up have partnered up to put together a bonafide military flick exactly not in the same vein as “Con Air, Jarhead, Green Zone, the Hurt Locker, ugh.”

The coalition wants to focus on the things that really drive the military. You know, cool stuff. If you’ve seen the MBest11X YouTube channel, that’s just a taste of what to expect when these guys get a few hundred grand to shoot a real full-length action movie.

“We’re making the military movie you’ve always wanted someone to make: relentless ball busting, guns, explosions, hot chicks, booze, and more guns. We will not dramatically salute each other,” they explain. “We will kill lots of s–t, all while using our weapons correctly. Again, there will be hot chicks. Mat will probably sleep with all of them. And I mean that both in the movie and in real life. Seriously, that guy has a real problem. Tim Kennedy may or may not be oiled up in a loin cloth.”

It’s the word’s first true “tactical comedy,” said Mat Best on Facebook. “The title of the movie is Range 15, and it will be a full feature film of the crew attempting to survive a post-apocolyptic, catestrophic event where the world’s fate lies on the shoulders of the familiar faces you know cannot take anything seriously.”

If you’re not familiar with the team, they’re “nine veterans who got out of the military and believe in the American Dream that anything is possible if you work your ass off. Six of us are regular dudes that served in the infantry and special operations. One of us (Tim Kennedy) fights in the UFC. Two of us (Dakota Meyer and Leroy Petry) were awarded the Medal of Honor for extraordinary valor. They also make a fine quiche.” 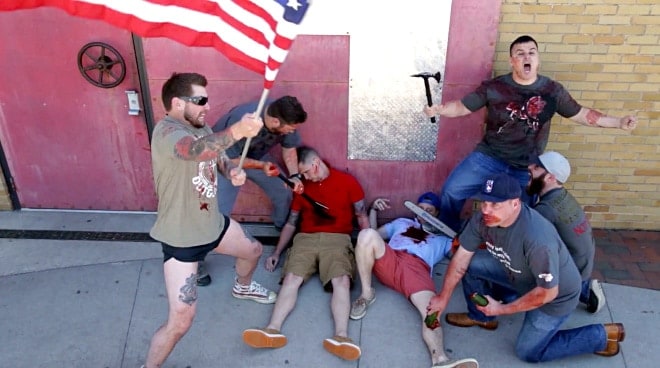 Don’t expect to see much saluting in this flick. (Photo: Ranger 15)

The Range 15 movie project raised almost $100,000 in just the first few hours after going live. These guys have a huge fan base and even though they’ve got a higher target – $325,000 – compared to a lot of crowdfunding projects, they’ve also got people to back it. And the fact that they’re practically a third of the way there on day one should make everyone involved pretty happy.

Of course, we’re not saying it’s locked in, if you want to see Range 15 become a reality get in on the IndieGoGo project and pitch in. Everyone who backs the project will be rewarded with perks small, large and even epic.

Everyone who backs the project – the reward for pledging $10 American or more – is a chance to become part of the Range 15 Militia, the exclusive invite-only Facebook group that will chronicle production and highlight all the behind-the-scenes action. The crew will also host live streams to engage with the Range 15 Militia personally as the movie progresses.

Rewards for backers start at $10 but run as high as $150,000 – the Big Dick Playa Bilzerian Role – and not only get backers copies of the movie, thank-you credits, producer credits and even roles in the film for high-dollar contributors, they also come with the warm fuzzy feeling that successfully crowdfunding a project gives you.

At this rate it does seem likely that they’ll reach their goal so what happens if they exceed it? Well everything will get better, naturally. More explosions, more action, more everything. The more money the Range 15 project gets the better the special effects will be. Who knows, fingers crossed, they’ll get Carl Weathers or Mila Kunis to sign on for a shot or two.