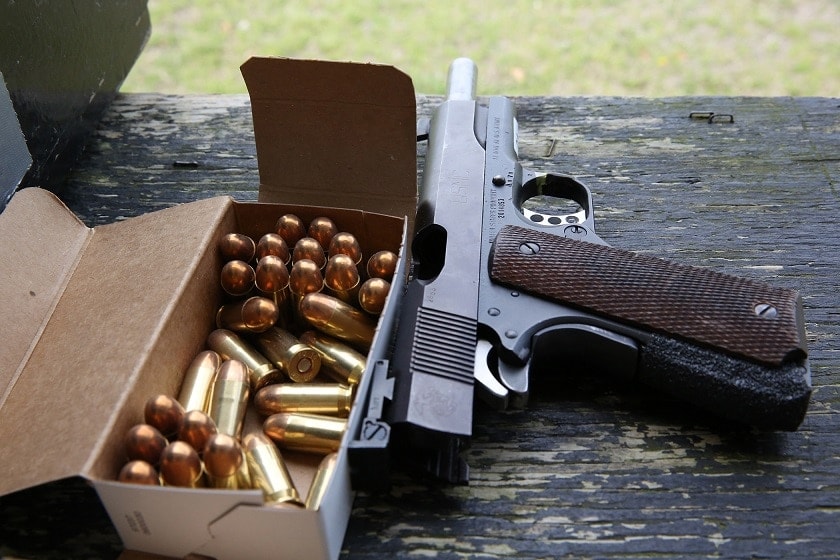 The DOJ, through pressure on the Army, is kicking up dust to keep 100,000 surplus M1911A1s locked away and out of the hands of collectors. (Photo: U.S. Marine Corps/Sgt. Alicia R. Leaders)

An Army whitepaper released Monday, prompted by the Department of Justice, questions a plan sending as many as 100,000 “untraceable” 1911s, referred to as “popular crime guns” to the Civilian Marksmanship Program.

The paper, obtained by the Huffington Post, cites the concern passed to the service branch of President Obama’s DOJ that a measure currently moving through the House could end up with the Army’s frozen surplus of .45 ACP pistols could end up arming criminals.

The guns, remnants of more than two million produced for the Army between 1912 and 1945, were withdrawn from service in the 1980s but cannot by law be cleared for disposal. Lawmakers believe this could save the estimated $200,000 per year spent to store the unneeded weapons.

However, the nation’s federal law enforcement officials are pumping the brakes on the plan to move them to the non-profit marksmanship corporation for resale to collectors and shooting enthusiasts.

“There is a significant risk of approximately 100K semiautomatic handguns that are virtually untraceable, being released into commerce,” the paper reads. “Per DOJ, M1911 pistols are popular crime guns. Over the last 10 years, they traced an average of 1,768 M1911 pistols with a significant percentage (percentage not provided) ultimately identified as surplus U.S. military firearms.”

The Bureau of Alcohol, Tobacco, Firearms and Explosives maintains the National Tracing Center –the nation’s only crime gun tracing facility — which traced some 336,000 crime guns in calendar year 2013. The process typically involves running the serial number back through the manufacturer to wholesalers and distributors to the end licensed dealer. On used guns that have had multiple sales, surplus military guns, or guns that have seen their manufacturers go out of business, this process often leads to dead ends.

The Army paper also cast shade at the prospect of expanding the CMP’s current mission to allow it to sell surplus handguns. While a military program it sold them in the 1960s, but has not done so since breaking away from the Army itself.

“If Congress intended for CMP’s firearm safety mission to include handguns or believed CMP should have the authority to resale handguns to generate revenue to support other programs, it would have required the Army to transfer the surplus M1911A1 inventory to CMP in 1996 when the program originally moved from the Army to the Corporation,” the report reads.

The paper also called into question the public safety of CMP sales as a whole by saying, “Although the provision does communicate that CMP cannot sell the firearms to prohibited persons, the provision does not include a mechanism to verify and confirm the information obtained through private, Internet or mail order sales.”

However, it is not all that easy to get a milsurp rifle from the CMP to begin with.

Currently the primary surplus Army firearm the CMP sells to eligible members of the public is the M-1 Garand, of which they have sold 400,000. While the corporation is not a federal firearms license holder, it is allowed by law to sell these curios to individual collectors who pass a number of qualifications that actually go beyond that of your typical FFL. These include:

Provided the applicant meets the requirements and pays for the firearm, the CMP then ships the gun directly to the buyer. In accordance with state law in jurisdictions such as California, New York, Connecticut, and New Jersey, the CMP will only ship surplus firearms to licensed dealers who then proceed with the final sale and background check before passing the rifle on to the buyer.

Further, as many CMP-sold firearms are highly valued by collectors, the likelihood of these guns being passed along to prohibited possessors for use in street crime is low, barring theft, at which point the gun owner could report the firearm stolen — thus allowing it to be traced by the ATF if recovered.

In effect, the guns at the center of the debate are frozen in place. As the Army generally hasn’t contracted for new 1911 frames since 1945, those currently on hand are obsolete, with the newest of the stock pushing 70 years old, making them unlikely candidates for front line service. Typically the only use seen by the military for these veteran handguns is as a platform to build into non-combat marksmanship firearm for military shooting teams — ironically in many CMP sponsored matches. Other than that, just 8,300 M1911s have been loaned out since 1996 to law enforcement agencies through the DoD’s 1033 Program, which allows qualified police forces to request up to one .45 ACP pistol per full time officer.

Nevertheless, the nation’s primary land defense force can’t get rid of them.

While the military is prohibited by language in the 2015 Appropriations Act Continuing Resolution from spending any funds “demilitarize or dispose of M–1 Carbines, M–1 Garand rifles, M–14 rifles, .22 caliber rifles, .30 caliber rifles, or M–1911 pistols…” meaning those in Army custody cannot be torched, current law only allows for the transfer to the CMP of .30 caliber and .22 caliber rifles. This means the Big Green can’t pass on any handguns even if it wanted to.

In the end, these guns may continue their quiet storage, as House Democrats are now seeking to strip the amendment to transfer them away from the National Defense Authorization Act, which is up for debate this week on the floor.

“This provision, which the Army has said it does not want or need, could potentially put nearly 100,000 untraceable .45-caliber military-grade handguns on our streets,” said a representative for Rep. Adam Smith (D-Wash.). “This provision is an unnecessary risk.”

Experts on historical military weapons scoff at the brewing controversy over these surplus guns.

“The opposition of the anti-gunners to the proposed sale of M1911A1 pistols by the CMP is as predictable as it is misguided,” Bruce N. Canfield, a noted firearms historian and author of numerous books on post-Civil War weaponry, told Guns.com.

“I don’t know what the CMP would sell the guns for but, for the sake of argument, let’s say $1,000 each.  Logic would tell anyone with half a brain that gang-bangers, criminals who hold up liquor stores and other nefarious characters won’t be standing in line to pay a grand for a 70+ year old gun when much more modern pistols can be bought for a fraction of that amount,” he explained.

“The guns would be prized collectibles and much less likely to be misused than the vast majority of firearms on the market today (legal or otherwise).  Let’s hope the politicians use common sense for a change and not cave in to political expediency or pressure from opponents of the Second Amendment,” Canfield said.