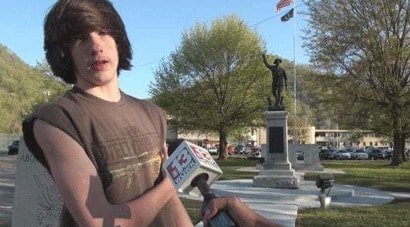 Jared Marcum points out that not only did the school’s dress code policy not prohibit images of guns, but a statue on the school grounds depicts a soldier with a rifle and a grenade. (Photo: WOWK)

The mother of a teen who was arrested and suspended for wearing – and refusing to take off – a National Rifle Association t-shirt to school last April has filed a lawsuit against the school district, claiming her son’s constitutional rights were violated when they prohibited him from wearing the shirt.

The suit named a dozen defendants, among which were Logan Middle School and faculty involved in the incident, including the school’s principal and several teachers, and multiple members of Logan County Board of Education were also named.

The complaint, which was filed in federal court last month, calls for $200,000 in compensatory damages and $250,000 in punitive damages.

Jared Marcum, who was 14-years-old at the time, was stopped by school staff members while standing in line in the cafeteria at lunch time. Staff members told Marcum that his shirt, which featured the NRA logo, a rifle and the words “Protect Your Right,” violated the school’s dress code policy (which has since been removed from the school’s website). The policy prohibited the display of profanity, violence, discriminatory messages or sexually suggestive phrases, but said nothing about images of guns or firearm organizations.

Marcum, who had no prior police record, stood refused to remove the shirt or turn it inside out, which landed him not only being suspended, but arrested and charged with obstruction and disturbing the education process.

Yet following his suspension, the teen returned to school wearing the exact same shirt that caused the controversy, and a number of other students wore similar shirts that day in an effort to show their support for Marcum.

School officials, who have remained somewhat moot on the matter, claim the suspension and arrest were due to the teen’s unruly behavior, not the t-shirt. Still, Marcum and his parents disagree.

In fact, two months after the incident, the charges against the teen were dropped, and Judge Eric O’Briant, who was overseeing the case, made it clear that “the state of West Virginia is not interested in the possibility of creating a juvenile criminal record for this defendant.”