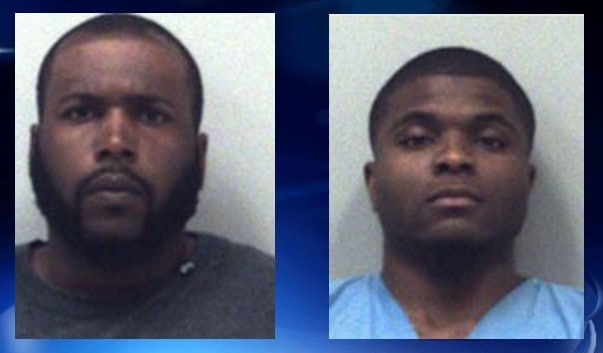 Saveion Wylie Bush (left) and John Michael Bush (right) are now charged with murder after their accomplice was shot and killed while the group was in commission of a felony. (Photo: WSB-TV)

An attempted home invasion at an apartment complex in Peachtree Corners, Georgia, late Monday night ended with two suspects in custody, one recovering from a gunshot wound, and a third one dead after the resident opened fire on the group.

Gwinnett County Police Cpl. Michele Pihera told local media that the resident, whose name has not been released, saw several men on his back patio around 11:30 p.m. Not knowing what their intentions were, the resident, who was home with his wife and baby, armed himself with a gun.

Moments later, the resident heard a knock at the door and when he opened the door slightly, outside stood three men: one wearing a mask and another holding a baseball bat. The men told the resident to step outside, and he replied by telling him he had no interest in doing so.

The resident then attempted to close the door, but the group of men forced their way inside. At that point, the resident fired three shots.

When police arrived, they found one of the suspects lying in the breezeway. He had been left behind as his accomplices fled from the scene and was suffering from two gunshot wounds to the chest. He was transported to a local hospital, where he later died. His identity has not been released, pending notification of next of kin.

A short time later, John Michael Bush showed up at the hospital with a gunshot wound to his arm, and an investigation determined he was one of the suspects involved in the home invasion. The man accompanying Bush, identified as Saveion Wylie Bush, was determined to be the third suspect, and did not appear to be injured. The two suspects are related, but their relationship is unknown.

According to a report by the Gwinnett Daily Post, authorities used a K-9 unit at the scene, which followed a blood trail and led them to the suspects’ residence, a short distance from where the home invasion occurred.

John Bush and Saveion Bush have been charged with first degree home invasion, aggravated assault and felony murder, for the death of their accomplice. No charges have been filed against the resident.

After the incident, a somber tone was taken by others around the apartment complex.

Khondoker Shoab said he moved to the area from New York to provide a safe environment for his family, but now he is considering another move.

James Oliver had similar thoughts. He said he and other residents have worked hard to build a sense of community and safety at the complex – a sense which has now been disturbed.