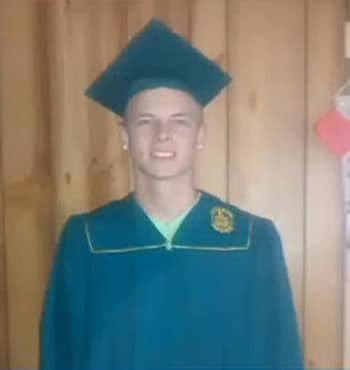 The teen’s father said he has been under a lot of stress recently, as he high school graduation approaches this weekend. (Photo: Fox)

A 17-year-old boy is in the hospital recovering from a gunshot wound after he was shot by a neighbor while trying to get into the man’s home. The teen was running around the yard naked, screaming profanities and threatening his neighbor’s wife.

The homeowner fired on the teen, but also accidentally struck his own wife.

Residents in the Hamilton Township, Ohio, neighborhood said the teen had tried breaking into at least two homes in the area a little after 10 p.m. Saturday and was acting irrational.

The teen’s father, Kristopher Wheelen, said his son had been hanging out with some friends at his house and everything seemed fine at first, but after his friends left, the teen went out for a walk.

“He just seemed a little off,” Wheelen told Fox 19, “Like he wasn’t really himself.”

He said the boy, who is set to graduate from high school Saturday, is a typical teen, a good kid, but has been under a lot of stress lately.

Feeling that things were perhaps off kilter, Wheelen went to look for his son, and the scene he stumbled upon was the teen completely naked, running around a man’s yard, yelling and acting extremely perculiar. The police had already been called by two different residents and one homeowner had out a gun, as the man’s wife warned the teen not to come any closer.

The wife told the 911 dispatcher that she believed the kid was “on something.”

The woman attempted to talk the teen down, warning him that her husband would shoot him, but he was relentless. Moments later, the man opened fire, striking the teen in the stomach and also hitting his wife, who again told the dispatcher to hurry and that she could not see out of her right eye very well.

Soon thereafter, authorities arrived and the teen and the woman were transported to the hospital. Both are expected to recover.

It’s unknown what kind of gun the homeowner used, but Wheelen and the other residents are at odds over whether or not the homeowner was justified in firing his gun.

“I feel like if they were a threat to him, or he was a threat to them, they would have walked in their house,” Wheelen told a local NBC affiliate, pointing out that the police sirens could be heard when the man shot his son.

He thinks the couple should have gone into their house and locked the door instead.

No charges have been filed against any of the involved parties at this time, but the incident is still under investigation.

Correction: A previous version of this article indicated that Ohio passed a stand-your-ground law in 2013, but this was incorrect. The bill made it through the House, but was never signed into law. While the state does have a Castle Doctrine Law, there is still a duty to retreat.