SIG Silencers has been drumming up the excitement over the premium and forward-thinking new line of centerfire rifle, pistol and rimfire suppressors for over a year and today the company announced that the new cans are now shipping, including their one-of-a-kind tubeless suppressors.

While there are good plenty of good reasons to be interested in SIG’s new lineup the tubeless suppressors are what really take the spotlight. Thanks to advances in welding and cutting techniques — and the guidance of suppressor guru Kevin Brittingham — SIG’s new rifle cans are don’t use an outer tube, instead, the baffles are precisely aligned and welded together before finishing.

The unique design provides more expansion room inside the suppressor and cuts unnecessary weight. Depending on the mounting system and suppressor material, new SIG silencers can weigh as little as 9.8 ounces, and the quick-detach mount weighs just 2 ounces more at 11.8 ounces.

Quick-detach suppressors use a new type of mounting system called Taper-Lok. The Taper-Lok mount is designed to prevent seizing due to fouling in extreme cases and generally come off more easily than other quick-detach systems. 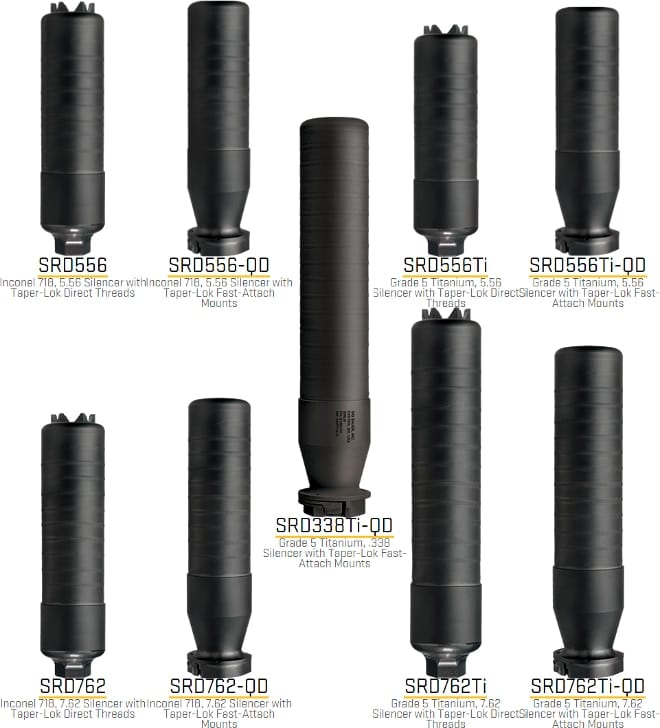 Their heaviest suppressor is also their highest-rated, a 300 Winchester Magnum can that weighs 17.9 ounces. This magnum silencer is designed to accommodate any centerfire cartridge that fits inside the .300 Win. Mag. power envelope, including common intermediate calibers like 5.56 NATO and 5.45x39mm and small varminting cartridges.

Along with those SIG is launching a pair of handgun suppressors, one in 9mm and the other in .45-caliber. Like the rifle suppressors, they’re multi-caliber rated for anything within the host cartridge’s power envelope, and the .45 model is explicitly rated for .40 S&W and 9mm Luger in addition to .45 ACP. That includes the booster for Browning-style recoil-operated handgun.

Likewise the rimfire model is rated for more than .22 Long Rifle, including rimfire cartridges up to .22 Magnum and .17 Hornady Mach 2. The pistol and rimfire models use a more traditional design with titanium and stainless steel components.

All of SIG’s suppressor catalog is competitively-priced with MSRPs starting at $395 for the rimfire model, $495 for the handgun models, and $545 for the least expensive centerfire model. Rifle suppressors top out at $995 for the .300 Win. Mag model and the rest largely group in the $600 to $800 range.

To see a complete list of prices, details and specifications it’s time to head over to the new SIG Silencers website. It has all the information and more about these cans, their options, and SIG’s in-house Taper-Lok system.