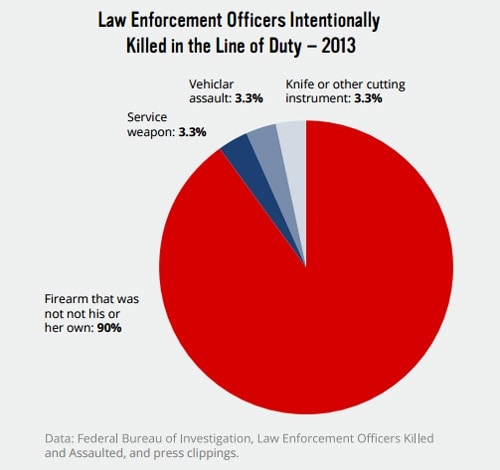 A report released Wednesday by Everytown for Gun Safety shows more than half of the U.S. police officers killed in the line of duty in 2013 were shot by an individual who was legally prohibited from either buying or possessing a firearm.

Of the 25 cases where police officers were shot and killed, 13 of them – or 52 percent – were at the hands of a person prohibited from otherwise legal gun ownership due to criminal, mental health or other history. 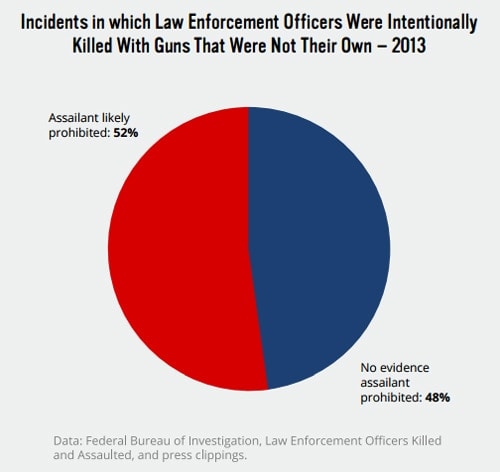 “Police officers are on the front lines protecting our communities each and every day,” said John Feinblatt, president of Everytown for Gun Safety. “We owe it to them to close the loopholes that make it easy for criminals to dodge background checks and easily get their hands on guns.”

Feinblatt blames the country’s “weak gun laws” for allowing prohibited persons to slip through the system and obtain guns, often through illegal gun trafficking. In fact, one report showed that in New York, where gun laws are stringent, 90 percent of the guns recovered from crimes were obtained illegally over state lines.

The report aims to prove that better gun laws, particularly universal background checks, will save the lives of law enforcement officers, but not everyone agrees with that stance. 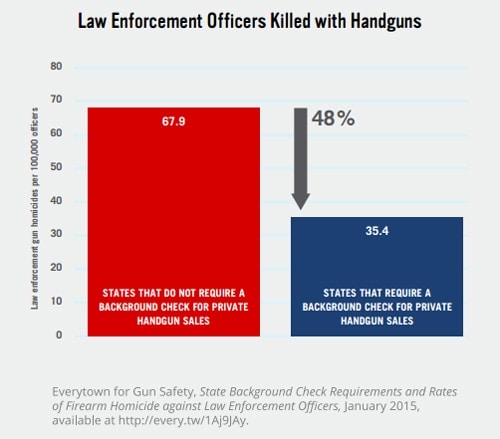 Jennifer Baker, spokeswoman for the National Rifle Association, said the NRA doesn’t believe that more laws are the answer to keeping guns out of the hands of criminals. She called the Everytown study a public relations stunt and exploitation of the tragic deaths of law enforcement.

“It proves the point that no law – including the capital offense of murder of a police officer – is going to prevent the worst elements of society from committing the worst sort of evil,” Baker told the Huffington Post. “In the majority of the cases cited it was already illegal for the assailant to possess a firearm and to suggest that more gun control would have stopped any of these crimes is at best naive.”

In a release recently published by the FBI, preliminary data showed that the number of police officers killed in the line of duty in 2014 was up 89 percent from the previous year, which saw a record-low number of deaths, but in 2013, the majority of officers’ lives who were lost in the line of duty, were the result of accidents, not shootings.