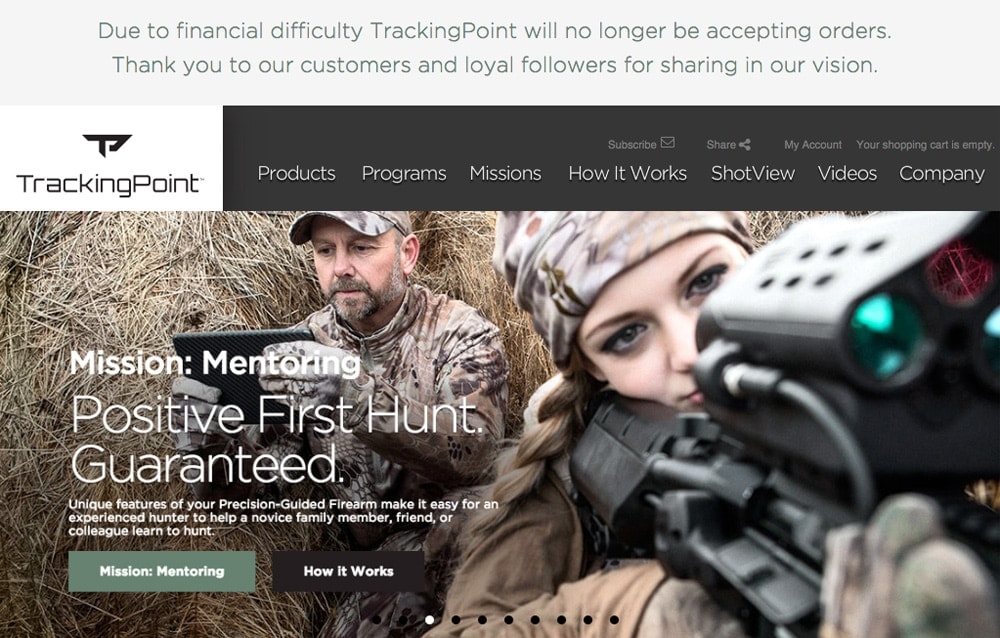 TrackingPoint’s message at the top of the screenshot was posted today.

TrackingPoint Inc. announced today that it’s experiencing financial difficulties so it will no longer accept orders.

The Texas-based scope company, located north of Austin, launched almost three years ago when it introduced the precision guided firearm system that allows the user to tag a target up to 1,000 yards out and hit it once the trigger is fully compressed.

Source familiar with the company told Guns.com that more than 20 people were laid off today and given a two-week severance package, but we have been unable to confirm those details with an official with the company.

Rumors of financial difficulties surfaced in February when the company hired a new chief executive officer and laid off an unspecified number of employees. At the time new CEO, Frank Bruno, told Guns.com that the company was cutting its research and development branch in order to lower costs and initiate new steps in a business plan.

“We’ve invested $45 million and the core technology is mature,” Bruno said in February, adding that was the focus before. “Now we’re all about enhancing it and innovate off of [the technology].”

Although exact sales figures are not available, the company also said in February it sold 180 percent more units than expected in 2014. However, the price of each unit ranges from several thousand dollars to close to $30,000.

Reports from June put TrackingPoint’s estimated revenue at $20 million for 2014, and $10 million revenue in 2013, but the company’s new CEO, Frank Bruno, declined to say in February if these figures were in line with current growth.

Guns.com made repeated attempts to contact the company, but TrackingPoint has yet to respond.