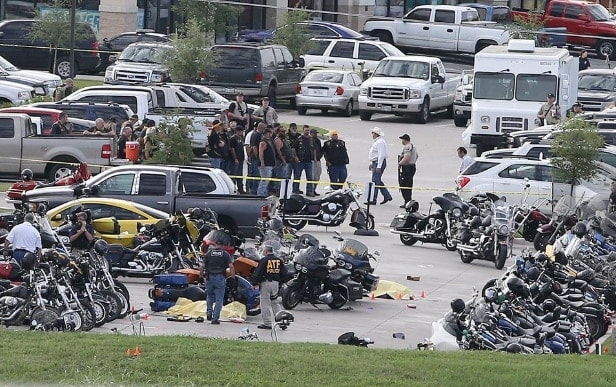 After the fight, several deceased bodies were left in the parking lot and cars were peppered with bullet holes. (Photo: Associated Press)

A dispute between members rival biker gangs at a restaurant in Waco, Texas, Sunday afternoon quickly escalated to what authorities called an “extremely chaotic” scene.

The Sons of Anarchy-style melee started with fists, clubs, chains, knives and eventually escalated into a shootout. In the end, nine bikers were dead, 18 others wounded, 192 people were arrested and more than 100 weapons were confiscated.

“I was amazed that we didn’t have innocent civilians killed or injured,” Sgt. W. Patrick Swanton with the Waco Police Department said in a statement, as reported by the Associated Press.

There were approximately 150 to 200 bikers, representing at least five different gangs, inside the restaurant when the violence erupted. The brawl apparently started in the bathroom and was said to initially be over a parking space, according to KWTX. But the fight spilled out into the restaurant.

Further chaos ensued as a shootout between rival gang members occurred, and the fighting overflowed into the parking lot of the busy shopping center.

Authorities were already on the scene when the fighting began, and once the bikers turned their weapons towards law enforcement and opened fire, officers responded by shooting back and taking control of the scene very quickly, Swanton said, adding the actions of the officers helped to prevent further deaths.

Restaurant patrons and employees were said to have taken cover in the establishment’s deep freezer as the gunfire broke out.

It wasn’t immediately clear how many bikers were shot by the officers and how many were shot by rival gangs, but no officers or innocent bystanders were injured.

McLennan County Sheriff Parnell McNamara confirmed all of those killed were members of the Bandidos or Cossacks gangs. According to the Texas Department of Public Safety, the Bandidos gang is considered a Tier 2 threat, the second highest threat level. The Bloods and Crips, as well as the Aryan Brotherhood of Texas, are other groups in this tier.

The identities of those injured and killed have not yet been released, and the conditions of the injured individuals are unknown.

Nearly 200 bikers were arrested, and all have been charged with engaging in organized crime, but additional charges, including capital murder, are possible.

Swanton said law enforcement, as well as the management at Twin Peaks, a franchised sports bar with scantily clad waitresses, were aware of the meeting that was planned between the biker gangs and although authorities urged the restaurant not to allow them to use the establishment for the meeting, they did anyway.

“We feel like that they [Twin Peaks] did not take our advice and try to keep the bike groups from being here,” Swanton told a local CBS affiliate. “They absolutely have a right to refuse service to people that may be a harm to their patrons and employees. They didn’t do that, and today is the ultimate aftermath of what their decision was.”

Jay Patel, operating partner at the Waco Twin Peaks released a statement Sunday expressing his dismay over the violent incident. He said safety is the restaurant’s top priority and indicated he and his staff are working closely with authorities during the investigation.

However, Swanton called the statement a “fabrication” and said the restaurant’s management have not been cooperating with authorities.

Out of concern of further violence, the Texas Alcoholic Beverage Commission has since shut down the establishment. The entire shopping mall where Twin Peaks is located has been closed due to safety concerns.

Swanton said there has been numerous threats against law enforcement throughout the night, as well as reports of gang members gathering at other locations, but assures the situation is under control and “citizens are safe.”