Obama administration lowers the boom on military gear for police 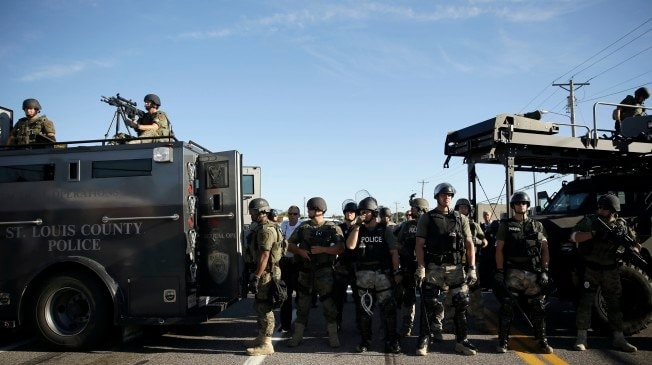 Effective immediately, the White House has banned the transfer of several classes of weapons and gear to police agencies. (Photo: AP/Jeff Roberson)

Following a year of high-profile riots and demonstrations, the White House on Monday moved forward with implementing a ban on transferring some weapons and military equipment to law enforcement.

The Task Force on 21st Century Policing, a now permanent separate federal inter-agency working group set up by executive order of President Barack Obama in January, has released its final report, which the president has ordered placed into effect through the Departments of Justice, Defense and Homeland Security.

Among the list of items now prohibited from being transferred either from surplus military stocks via the DOD’s 1033 Program or bought through DHS grants are tracked armored vehicles, weaponized aircraft, vessels or vehicles of any kind; firearms or ammunition of .50 caliber or higher, grenade launchers, bayonets and camouflage uniforms.

“The Working Group concluded that a prohibition on acquisition of such equipment by LEAs [law enforcement agencies] from Federal programs is appropriate because the substantial risk of misusing or overusing these items, which are seen as militaristic in nature, could significantly undermine community trust and may encourage tactics and behaviors that are inconsistent with the premise of civilian law enforcement,” reads the report. “These concerns outweigh the Federal Government’s interest in providing this equipment to address law enforcement needs (that could not otherwise be fulfilled).”

In addition to prohibiting the future transfer of the now-restricted weapons and equipment, the administration is also seeking to recover those that are already in the hands of police agencies nationwide.

Besides the banned items, further controls are placed on the transfer of manned and unmanned aircraft, wheeled armored and tactical vehicles such as MRAPs and humvees, pyrotechnics, breaching apparatus and riot gear. While these items will still be available to some agencies, they will not be transferred to school police forces tasked with securing K-12 campuses and the overall distribution of these items will be heavily scrutinized in the future.

Although the group acknowledges the potential value of these controlled items, they also outlined that requesting agencies had to be able to demonstrate their need.

“[G]iven the potential for misapplication of controlled equipment listed above, LEAs must provide expanded justification for its acquisition, including a description of how the equipment would be deployed, the agency’s policies and protocols on deployment, and verification of training provided to LEAs on the appropriate use of such controlled equipment,” the report said.

The Pentagon’s surplus program, officially the Law Enforcement Support Office, but better known simply as the 1033 Program, was set up in 1997. Run by the U.S. Army, it allows federal, tribal, state and local law enforcement agencies to request excess equipment from the military’s stockpiles. The items available range from vehicles and aircraft, to office equipment and weapons. Since its inception, the program has transferred some $5.4 billion worth of property to agencies, including $980 million worth in 2014 alone.

This has led to sensationalized reports of rural sheriffs acquiring five weapons for each full time deputy, coroners with humvees and M16s, and public school districts with grenade launchers and MRAPs.

Such reports, coupled with images of camouflaged peace officers operating from armored vehicles following the mayhem triggered by the police shooting of a black teen in Ferguson, Missouri, last summer, led to a backlash against the program.

Last October, the American Civil Liberties Union and more than 35 other organizations appealed to Secretary of Defense Chuck Hagel to declare a moratorium on the 1033 Program until the various reviews by Congress and the White House are concluded. That review resulted in Monday’s actions.

In addition to the controls and prohibitions on gear, the group is set in expand oversight and implement mandatory training and inventory verification guidelines for agencies that receive grants or donations.

The prohibited weapons list is in effect immediately while the other recommendations of the task force will be implemented in October with the new fiscal year.