Unable to sell Remington, Cerberus will let investors cash out 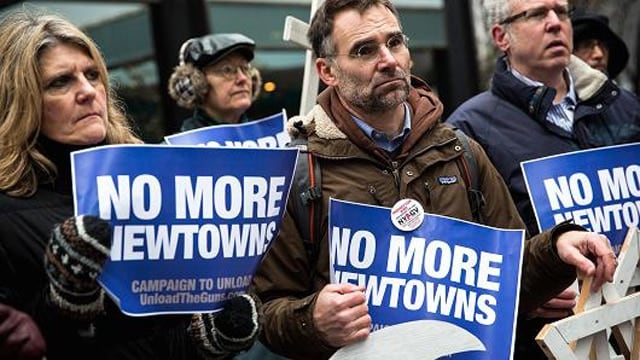 Protesters in December 2013 in New York call on Cerberus Capital Management to divest its gun holdings. A rifle by one of its investments, Bushmaster Firearms, was used by a gunman to kill 20 children and six educators at Sandy Hook Elementary School in 2012. (Photo: Getty Images)

The investment firm that has been building up a conglomerate of gun companies, most notably Remington Arms, has been unable to find a buyer and will let investors sell their stakes in the company,  The New York Times reported Friday.

Cerberus Capital Management informed investors Friday of options in a letter obtained by the newspaper. “We are disappointed that we were unable to effect an outright sale of the company or other comparable transaction,” the private equity firm wrote in the letter, according to the Times.

Remington Outdoor Company, formerly known as Freedom Group, is valued at about $880 million, and the firm said investors’ stakes will be valued accordingly.

However, the company is expected to lose money in the deal as there’s likely no competitor with enough capital to outright buy Remington. Other large investment banks like JP Morgan Chase and Credit Suisse tend to shy away from such investments and an overall decline in gun sales may also act as a deterrent, the Times reported.

The owner of the firm, Stephen Feinberg, has been trying to sell the company since the shooting at Sandy Hook Elementary School in Newtown, Connecticut, in which 20 first-graders and six educator were killed by a gunman armed with a rifle made by Bushmaster, one of the many companies in the conglomerate.

The decision to sell was more social and personal than financial.  For starters, Feinberg’s father lived in Newtown at the time of the shooting and since then a number of public pensions have pushed to divest from the company.

Investors have 30 days to decide if they want to take up the offer and many are expected to do so, the Times reported.

For now, Cerberus executives, Remington management and any investors who choose not to cash out will continue to own Remington through the newly created financial entity.