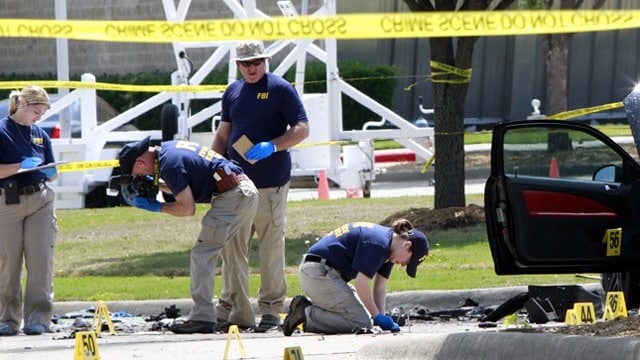 With a massive crime scene, investigators spent hours pouring over every bit of evidence. (Photo: Getty)

Twenty-four hours after nine people were killed and an additional 18 were injured during a gunfight between rival biker gangs at a Waco, Texas, restaurant, gun control advocates blamed the lack of adequate gun laws and insufficient background checks for the bloody brawl that turned deadly.

Shannon Watts, founder of the gun control group Moms Demand Action for Gun Sense in America, said Monday in a tweet addressed to Texas lawmakers that “more guns in more places with fewer safeguards [is] not winning strategy for public safety.”

Watts later added the incident should be a “wake up call” for Texas legislators to “stop taking orders from the gun lobby.”

The criticism comes as proposed legislation, which would make open carry of handguns legal, pushes its way through Texas, but not everyone believes any laws – present or future – would have stopped the violence from erupting.

“The shootout occurred when we don’t have open carry, so obviously the current laws didn’t stop anything like that,” said Texas Gov. Greg Abbott, according to a report by the Associated Press.

But Angela Turner, spokeswoman for the Texas branch of Moms Demand Action, said open carry adds potential danger to everyday confrontations and puts an unnecessary burden on law enforcement to determine who is a good guy with a gun and who is a dangerous criminal.

However, with five different rival biker gangs and approximately 170 gang members involved in the fight, Sunday’s violence could hardly be described as an “everyday confrontation.”

And according to C.J. Grisham, president of Open Carry Texas, Sunday’s shootout had nothing to do with open carry or any other gun laws.

Grisham pointed out that, unlike most members of biker gangs such as the Bandidos and Cossacks, which are considered Tier 2 threats, akin to terrorist groups such as the Aryan Brotherhood, most concealed carry license holders are law abiding citizens who have undergone gun training and background checks.

Nonetheless, according to a statement released yesterday by Everytown for Gun Safety, Turner and others believe background checks, which she claims is a way to “save lives and keep guns out of the wrong hands,” could have affected the outcome of Sunday’s biker gang war. Would stricter laws keep guns out of the hands of members of organized crime? (Photo: Associated Press)

“Everything is big in Texas,” said Jonathan Hutson, spokesman for the Brady Campaign to Prevent Gun Violence. “Including big biker shootouts and even bigger loopholes that allow criminals and other dangerous people to buy guns without a Brady background check at gun shows and online.”

But what gun control advocates have failed to address thus far is the fact that firearms played only a small part in the overall mayhem. In fact, according to reports from local media, after the shootout, authorities collected more than 100 weapons, including firearms, knives or “other unknown edged weapons,” batons, clubs, brass knuckles and “other weapons.”

Altogether, after the brawl, nearly 200 people were arrested and charged with engaging in organized crime, with some facing charges for capital murder. All are being held with a $1 million bond.