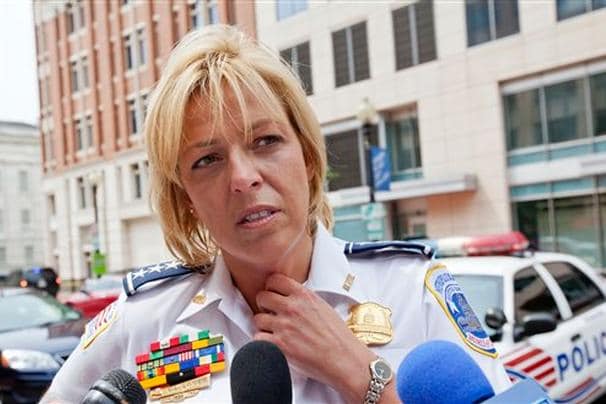 Washington D.C. Police Chief Cathy Lanier has been enjoined by a federal judge from using her “good cause” test when deciding on concealed carry applications. (Photo:AP)

A federal judge has issued an injunction barring Washington D.C. from applying its vague “good cause” test as part of its controversial may-issue permitting scheme that has declined more permits than it has granted.

The case was brought in February by the Second Amendment Foundation who joined the suit filed in U.S. District Court for the District of Columbia, Wrenn v D.C., in support of three private citizens who were denied permits by the city. Two of these are residents of the city and the third a Florida resident who lives in Virginia.

All three had their concealed carry permit applications refused by Metro Police Chief Cathy Lanier. None of the three, who desired permits for the purpose of self-defense, could meet the District’s strict requirement to prove a need or good reason to do so beyond a desire for self-defense.

While the city argued its guidelines were lawful and in line with past practices from older gun laws in the District, going back to 1857, the court did not agree.

“Plaintiffs, as well as the majority of law-abiding citizens, who fail to satisfy the District of Columbia’s ‘good reason/proper reason’ requirement because they cannot ‘show a special need for self-protection distinguishable from the general community’ or that they are engaged in a ‘type of employment that requires the handling of cash or other valuable objects that may be transported upon [their] person,’ are unable excursive their fundamental right to bear arms for self-defense under the Second Amendment,” wrote U.S. District Judge Frederick J. Scullin Jr. in a 23-page opinion from his bench in New York.

“Thus, the Court concludes that the District of Columbia’s ‘good reason/proper reason’ requirement impinges on Plaintiff’s Second Amendment right to bear arms,” said Scullin, who issued a preliminary injunction against Lanier and the city from enforcing the requirement.

Scullin, a 1991 nomination to the bench by President George H. W. Bush, was the same judge who, in his July 2014 ruling in the Palmer case, struck down the District of Columbia’s ban on carrying guns outside the home which resulted in the city adopting its new concealed carry plan.

Gun rights advocates greeted the news of Monday’s win with aplomb, saying that the District’s controversial licensing program did not pass the smell test.

“It stinks, and always did stink, and now everybody knows it,” said SAF Executive Vice President Alan Gottlieb in a statement emailed to Guns.com.

“This is a devastating loss for the District and its anti-gun-rights policy,” Gottlieb said. “We’re delighted with the judge’s ruling, because once again, the court has thwarted the District’s blatantly obvious effort to discourage the exercise of Second Amendment rights by forcing permit applicants to jump through a series of hoops and then frustrate them by requiring an arbitrary ‘good reason’ for the exercise of a constitutionally-protected civil right.”

D.C. Attorney General Karl A. Racine advised the city was weighing options for appeal; however, Scullin’s order states that attorneys for both sides shall appear for a conference with the court on July 7 to “discuss an expedited schedule for the resolution of this case.”