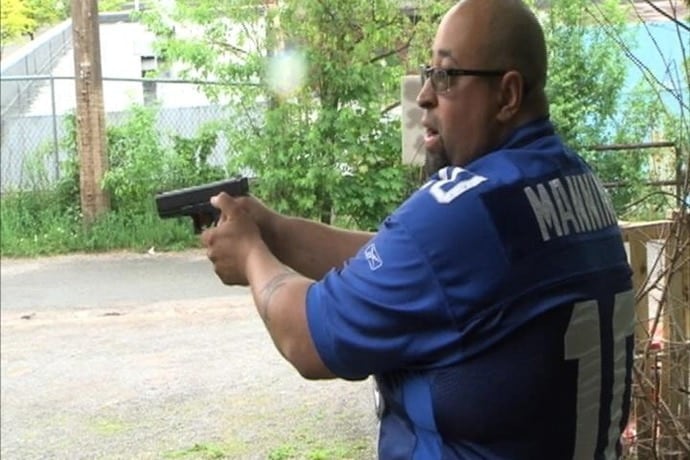 Henry Oppenheim said he would do it all the same if he saw someone else in need. “In a heartbeat,” he said. “Not a second thought. No reservations.” (Photo: WeAreCentralPA.com)

A woman is now safe, recovering from a harrowing ordeal which left her bruised and battered after being held hostage by a former boyfriend for almost an entire day before an armed neighbor intervened.

The Altoona Police Department received a call around 10 a.m. Friday about a naked man beating a woman in the back yard of a Pennsylvania residence, according to a release from the police department.

Two men, one armed with a gun, came to the woman’s aid, but what they didn’t realize at the time was that the woman had been held against her will for 20 hours and repeatedly assaulted throughout the night. The woman had been stabbed in the leg by her assailant, Henry Clinton Yancy Jr., who also indicated to her that she would not make it through the ordeal alive.

The woman saw an opportunity to escape Friday morning, but once she was out of the house, Yancy followed her. While on top of her, Yancy repeatedly punched the woman, before standing up and stomping on her face. When neighbors Nicky Mimikos and Henry Oppenheim witnessed the brutal attack, they quickly intervened.

Another neighbor, Tatiana Scriver, described the dramatic scene and said it sounded like a stampede running through the building.

Oppenheim told local media that he ran to his room and grabbed his gun, aimed it at Yancy and demanded he let the woman go. Eventually Yancy complied, and Oppenheim held him at gunpoint, while Mimikos and Scriver took the woman away from Yancy and to a safe place while waiting for authorities to arrive.

No shots were fired.

The woman was transported to the hospital where she received medical treatment. She has since been released and expected to recover. Yancy was also taken to the hospital for treatment of a pre-existing medical condition.

Yancy was arrested and charged with criminal attempt homicide, aggravated assault, burglary, criminal trespass and a slew of lesser offenses.

The Altoona Police Department thanked the neighbors for stopping the attack and providing first aid to the woman while waiting for police. Authorities added that Oppenheim, who has a valid concealed carry permit “acted appropriately.”