Car-bombs, AKs and grenades: Violence in biker gangs not limited to U.S. 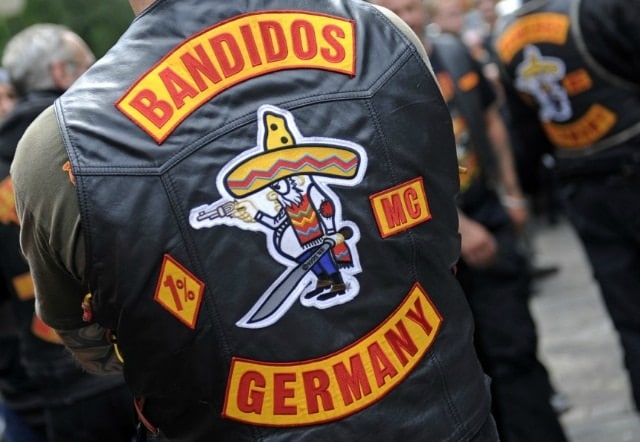 Open violence between motorcycle clubs over turf is not limited to the U.S., as Europe, Canada and Australia have seen bloodshed that included the use of guns, bombs and even rocket launchers. (Photo: Sky News)

Within a day following an all-out brawl that left nine dead and an additional 18 injured, gun control advocates blamed the lack of adequate gun laws and insufficient background checks for the bloody battle.

Then came an opinion piece by a professor of religious studies and anthropology at The University of Texas at Austin who made the same comparison while also pointing the finger at American gun culture as a whole for the violence.

“We need to enact legislation that will greatly reduce gun-related crimes and protect people from the dangers associated with widespread gun access and ownership,” wrote John Traphagan in the Dallas Morning News. “Unfortunately, our proven inability to handle widespread gun ownership suggests strongly that the way to do this is to deeply restrict access to and ownership of most types of guns.”

The professor held up examples of other countries that have established strict gun laws to include weapons bans as the route to a safer society.

However, it may not be that simple. You see, the rest of the world, including many of the more enlightened countries alluded to, has experienced their own violence at the hands of outlaw motorcycle clubs.

Over the past two decades there have been several brutal murders linked to criminal motorcycle organizations operating in countries such as Australia, Denmark and the United Kingdom that in many cases ban handguns and semi-automatic rifles and shotguns as a class while requiring extensive background checks and registration on potential gun owners of even the limited options availible.

Scandinavia, 1990s: No less than 12 people were killed and nearly a hundred injured in three years of open conflict that has been immortalized as the “Great Nordic Biker War.” This turf war, in which Hells Angels and Banditos motorcycle clubs and supporters blazed a trail of destruction across Denmark, Sweden, Norway and Finland, was fought not only with fists and knives but with illegal guns, car bombs and even anti-tank rockets and hand grenades stolen from military arsenals.

Germany, 2007: A 47-year-old Hells Angel was killed by two Banditos using an unregistered 7.65mm pistol in the quiet town of Ibbenburen following an escalating series of altercations between the two clubs that included machete attacks, ambushes, and running shootouts down the autobahn. The two later stood trial after a third club member testified against them for the killing. Later, a member of a Hells Angles auxiliary club became the star witness to the German federal government, claiming that club’s leader ordered a number of contract killings in reprisal for this incident and others.

England, 2008: Hell’s Angel Gerry Tobin was shot and killed while riding on the M40 motorway connecting London and Birmingham. Later, seven members of a rival motorcycle club, many with criminal histories, were sentenced to life imprisonment after an investigation tied the men to the unlicensed sawn off shotguns used in the crime.

Canada, 2009: Police in Quebec took down 156 people believed to be members of the Hells Angels because of their alleged involvement in 22 murders, drug trafficking, conspiracy and other offenses during what was known as the “Quebec Biker Wars” between the group and domestic Rock Machine club. According to news outlet CBC, the conflict amassed a butcher’s bill of more than 150 casualties, including two prison guards and 11-year-old Daniel Desrochers, who died when a car bomb exploded outside a club hangout.

Although almost extinct in Quebec, law enforcement as recently as last September have voiced concerns of the Rock Machine club’s resurgence in other provinces, which they fear could lead to a return to violence.

Croatia, 2010: During the annual Moto Klub Brod bike rally, riot police had to intervene in combat between Hells Angels and a rival gang from Bosnia known as the Grevinis, prompting fears throughout the continent of renewed biker wars.

Germany, 2012: In raids across the country, which has endorsed some of the strictest gun control measures since the 1930s, some 600 police backed by anti-terror units cracked down on chapters of the Banditos club, seizing weapons, cash and equipment used to target police. This came five years after the Ibbenburen shooting crackdown and an uneasy truce between the Angles and Banditos in the country.

The Kremlin’s Hells Angels: Last December, the U.S. Department of the Treasury imposed sanctions under a presidential executive order against a Russian motorcycle club, the Night Wolves, citing the group’s involvement in the conflict in the Ukraine, which included storming the country’s naval headquarters and recruiting for separatist militias.

“The Night Wolves group is being designated because it is an entity that is responsible for or complicit in, or has engaged in, directly or indirectly, actions or policies that threaten the peace, security, stability, sovereignty, or territorial integrity of Ukraine,” reads a statement issued at the time. The group has subsequently been banned from entering many European countries. 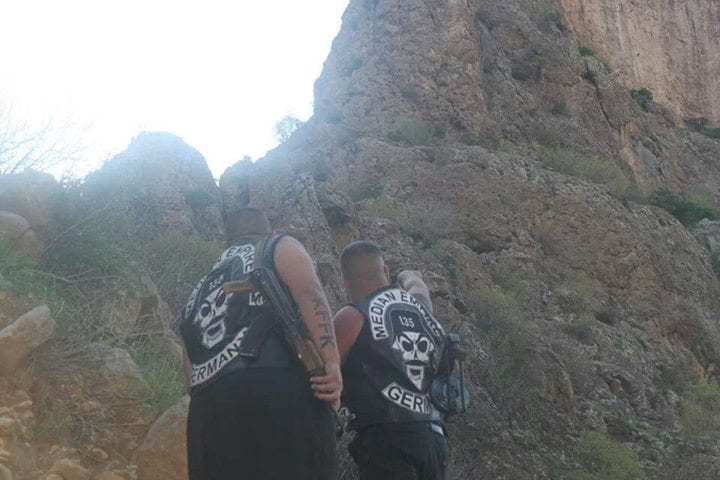 European outlaw bikers are so well known for their prowess with firearms and martial nature, that members of at least three Dutch and German clubs have even traveled to the Middle East in recent months in organized formations to join the fight against ISIS.

Pictures were posted by the groups showing members apparently active in the field, sporting AKs and three-part club patches. Subsequent posts showed what appeared to be access to advanced anti-tank rockets and belt-fed machine guns.

Even with the continent’s longstanding problems with heavily armed motorcycle outlaws, Europol, the European Union’s law enforcement agency, in 2012 issued a dire public warning about the influx of dangerous gangs from countries often touted by gun control advocates and the White House as models for curing U.S. gun violence. Counted among these outlaws? The Comancheros and Rebels from Australia and the Rock Machine club from Canada.

“The main threat to public safety associated with OMCGs [Outlaw Motorcycle Gangs] stems from their propensity to use extreme forms of violence. This includes the use of automatic rifles like Kalashnikovs, and explosive devices such as grenades, and the indiscriminate nature with which this violence is often used in open conflicts between rival groups,” cited the agency, although legal civilian ownership of grenades and automatic rifles is near impossible in Europe.

Australia’s national “anti-bikie” task force advised that one of the main reasons for the clubs from Down Under to migrate is to expand arms and narcotics trafficking routes.

”They’re not going over there to simply ride their bikes, they’re going to open up opportunities to get drugs and firearms back to Australia,” said Detective Superintendent John De Candia.

Meanwhile, back in Waco, police have identified all nine dead as members of either the Cossacks or Bandito motorcycle clubs and have released affidavits totaling more than 500 pages against 170 suspects currently in custody. Authorities there are pleading for calm from the clubs involved as motorcycle advocacy groups contend that early feedback from those who were there point fingers at police for many of the deaths.

“We are asking (the biker groups) to stand down, we are asking them to let us sort through our investigation and we will be honest with them as we have with you and will continue to be,” Waco police Sgt. W. Patrick Swanton told reporters.