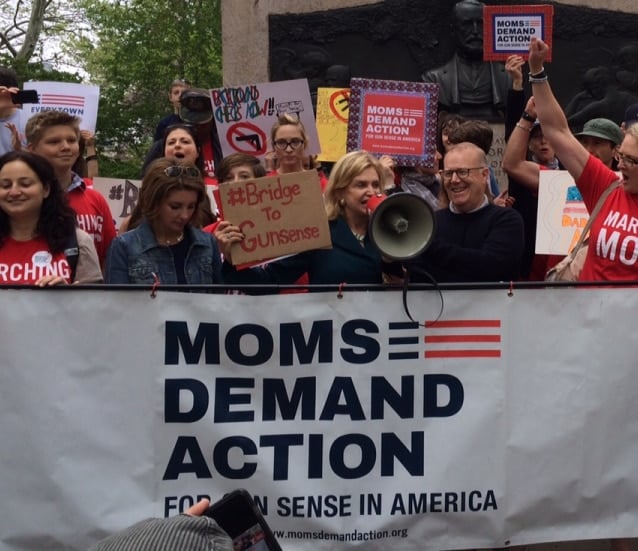 U.S. Rep. Carolyn Maloney, D-N.Y., addressing the crowd on May 11, 2015 at Moms Demand Action’s Brooklyn Bridge March, where she harangued those in attendance about increasing regs on gun shows. (Photo: maloney.house.gov)

The legislation would require that every transfer done at a gun show would have to pass a check through the Federal Bureau of Investigation’s National Instant Criminal Background Check System, while funding would be added to the Bureau of Alcohol, Tobacco, Firearms and Explosives to hire investigators specifically to patrol such events in search of regulatory violations.

“States across the country, including my home state of New York, have recognized the danger posed by this significant gap in our gun laws that allows complete strangers to buy and sell guns without the background check requirements Congress passed in the Brady Bill,” said Maloney on bill submission last week.

“I’m proud that there is momentum around the country to update our gun laws and ensure that weapons do not end up in the wrong hands — but the fact is that we need a federal solution to this national problem,” the lawmaker contended. “The Bureau of Alcohol, Tobacco, Firearms, and Explosives has cited gun shows as a ‘major trafficking channel,’ and lax gun show regulations in one state can allow guns in the hands of criminals in communities many states away.”

Maloney’s bill was filed Friday as H.R.2380 and currently has some 25 co-sponsors, all from her party. As noted in a release, the bill would require gun show operators to maintain a database of all sellers along with identifiable information for submission to the U.S. Attorney General’s office while establishing a mandate that all transfers– even private sales, which are currently not required by the federal government–undergo a background check.

Finally, the ATF would be authorized to hire gun show inspectors specifically tasked with policing such events.

Maloney, in Congress since 1993 after a decade on the New York City Council, has been a champion for gun control efforts in the House. Besides her efforts to bring background checks to gun shows nationwide, last year she joined U.S. Sen. Edward J Markey, D-Mass., in asking President Obama for $10 million in federal funding for the Centers for Disease Control to study gun violence as a health issue. She later proposed legislation asking for six times that amount for the same purpose.

Earlier this month she participated in Moms Demand Action’s third annual Brooklyn Bridge March, where she brought up both gun shows and gun violence as a health issue in the same breath.

The Gun Show Loophole Closing Act has been referred to the House Committee on the Judiciary.