What does "fair fight" even mean? 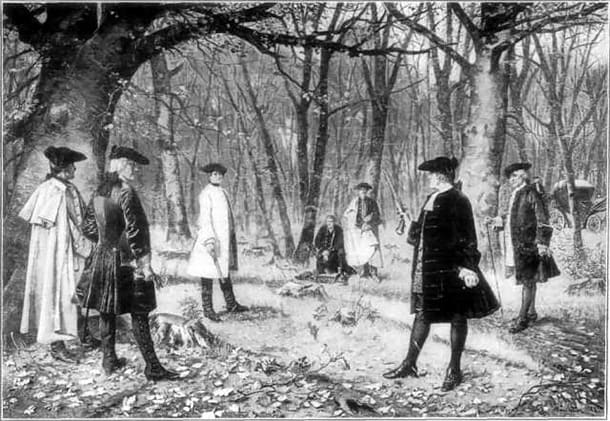 In debates with gun control advocates, I’m often accused of being a coward or a weakling.  The claim is that anyone in a physical confrontation is obliged to offer a fair fight only with fists.  If—gasp—the fight involves guns, apparently the only acceptable kind is the sort of duel that used to be the way gentlemen settled otherwise irreconcilable disputes.

I find this argument fascinating, especially since the stated goal of gun control is to reduce violence, not merely to insist that violence follow theatrical rules.  But let’s explore what it is that these advocates are promoting.

They seem to be tying into America’s own literary and cinematic genre, the western.  For a while, this brand of storytelling was considered passé, but perhaps the remake of True Grit, released in 2010, shows that the taste for the frontier narrative is still with us.  Still, the western has provided us with the image of how an honorable man conducts himself in a fight.  Think of John Wayne demanding changes to the script of The Shootist because he didn’t like the idea of his character shooting someone in the back.  The idea here is that the man who wears the white hat must give his opponent an equal chance, standing face to face at an agreed-upon street and time.

These rules are, in fact, derived from what was known as the Code Duello, the “laws” on how to hold an honorable duel.  But contrary to our cultural expectations, these rules come out of a time long gone and the simple fact is that dueling is illegal.  The Kentucky State Constitution even has a provision requiring attorneys and those who hold elected office to swear that they have not fought a duel.

Now the actual rates of violence in the Old West is debated, some claiming the myth of constant gun battles was reality, while others saying it’s just a tall tale.  As a writer of westerns myself, I admit to being guilty of perpetuating the story.  But isn’t the “Wild West” what gun control advocates claim we’re trying to impose on modern America?  Every time a bill is proposed in legislatures that will increase the exercise of gun rights, we’re told that we’ll have high-noon showdowns happening all day long—not just at noon—if the law is enacted.  So why the goading about how we’re supposed to be afraid if we’re not willing to do exactly what they keep warning us will take place?

I’ll leave that question to readers to draw their own conclusions about.  However, we who exercise gun rights while being good citizens need to bear in mind what is permissible, both in the law and in morality, when it comes to using a firearm in a fight.

At this point, I must make the standard disclosure of interested amateurs that I am not a lawyer, and the laws of each jurisdiction have their own fine points.  But I have taken concealed carry classes in Tennessee and Arkansas and have seen enough legal opinion about self-defense (such as here) to know that the general principle is as follows:  You have the right to defend yourself from an attack that puts you or possibly a third party in danger of death or serious injury.  Notice that under the law, you don’t have permission to defend your tender feelings, your spouse’s honor, your mother’s good name, or any other of the slings and arrows that obnoxious people like to throw.  You may only stop a lethal attack—and I said stop, not continue shooting once the threat is over.

So much for what I know of the law.  In moral terms, we also have obligations.  The good citizen will be the defender in any fight.  (This is a key argument against magazine capacity limits, but I’ll save that for another discussion.)  And this is what makes the accusations of gun control advocates fall flat.  By law and morality, I cannot be the one who starts the fight.  That being the case, how would I be obliged to offer an attacker a fair chance?  In fairness, I refrain from initiating a physical altercation.  That’s the only fairness I must give.  Don’t try to kill me, and you get an honest deal from me.

This all goes back to what I talked about in my article on framing of the gun debate.  What gun control advocates are trying to do is present us as fearful and volatile.  They operate with the narrative that we’re itching for a fight.  At this point, we must keep in mind that besides the legal and moral implications, there’s also the fact that there’s nothing more galling to someone spoiling for a fight than a person who remains calm.  It’s up to us to remind them and anyone else watching the debate that we know where the boundaries of good behavior are.